Nagoya Grampus will be eager to extend the winning streak when they welcome Avispa Fukuoka on Wednesday, 25 May. It promises to be an exciting duel as both teams have got the back of a league victory.

Avispa Fukuoka has done better in the points table than Nagoya Grampus but the hosts have been brilliant in the home H2Hs, winning four of the last five. Nagoya has also produced consecutive three ahead of this game. On the other hand, Hachi also seemed in trouble in the recent away outings and lost three of the previous five. Hence, we believe to see Nagoya on the winning side in front of their home fans.

The last two H2Hs at the home of Nagoya have gone with below 2.5 goals and the same will be the most probable result for this game. Nagoya Grampus have scored in the recent games consecutively but Avispa Fukuoka has failed terribly, scoring only one goal in the last four outings. The hosts also didn’t concede more than one goal in the previous three attempts.

The front line of Nagoya Grampus would be confident to have many chances to score as they netted the ball in four of the last five H2Hs. But Avi went goalless in four of the previous five visiting meetings against the upcoming rivals. In the recent matches, Nagoya Grampus have scored in all of the last seven games but Meishu found the target only once in the previous five away outings. In our opinion, Nagoya will be the only side to hit on the target in this duel.

Nagoya confirmed the successive second victory of the J1 League by securing the lead in the additional time of the last game against Shimizu S-Pulse. The consecutive victories helped the team advance to the thirteenth position on the points table. Kazuki Nagasawa will be out of the selection for this game because of a meniscal injury.

After a wait of two league outings, Hachi repeated the winning result in the last game against Yokohama F. Marinos. Avispa Fukuoka has registered four wins and six draws in the campaign so far and got the tenth position in the standings. The club manager Shigetoshi Hasebe will have zero injury issues in the team coming into this duel.

FAQs regarding Nagoya Grampus vs Avispa Fukuoka Coverage and Accessibility 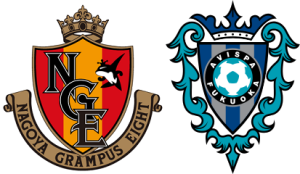 Where is the game being televised? DAZN Japan, Optus Sport (Aus).

Who won the last Head to Head fixture? Nagoya Grampus won with a 1-0 scoreline.