Nagoya Grampus will host the Kashima Antlers in an interesting match from the 18th round in the Japanese elite.

Nagoya Grampus have had an interesting season overall while Kashima Antlers have been one of the best teams in the league this campaign.

We have two completely different teams in this match and anything could happen. Nagoya Grampus are one of the teams that have had the fewest goals overall in their games and most of their matches end with less than 2.5 goals. On the other end, the Kashima Antlers have been one of the sides with the most goals overall and most of their games end with over 2.5. Nevertheless, there is a huge difference between these two teams and if we see goals, they should be coming from the visitors only. The first match between them ended in a 0:0 draw.

The teams played once this season already and shockingly, Kashima Antlers failed to win it. This time, we expect to see a different result. Although we cannot be too certain that Kashima will win as visitors, we think that they have the abilities and motivation to do it. Just to be sure, we pick the draw no bet option, which has value because it will return our money in the case of a draw. Kashima have been one of the three best teams this season and they need the three points from this match.

When it comes to corners, this combination of teams is the perfect case for an over bet. Nagoya Grampus and Kashima Antlers are two of the three teams that have had the most corners in their games this season. Nagoya Grampus take an average of 5.8 corners per game individually while Kashima Antlers take about 5.1 per game. When it comes to overall stats, Nagoya are the team that has had the most corners in their games – an average of 11.1 in 17 rounds.

Nagoya Grampus have been underperforming this season after that incredible campaign last year in which they finished 5th. The team has never been too strong offensively but this season has been a serious issue – only 14 goals in 17 games, which makes them the 2nd weakest in this aspect. Their defense is not terrible but much worse than last season. They conceded 19 goals in their first 17 games. Overall, the team has a lot of potential and needs to improve in attack.

Kashima Antlers have been one of the best teams for years but they failed to reach Top 3 in the previous season. This new campaign has shown us that they have the abilities to be even better and the team is a serious contender for the title. There are serious problems in defense but their attack has been the 2nd best in the entire league. Kashima scored 28 goals in 17 fixtures to date. As long as they improve defensively, they should be a contender throughout the entire season. 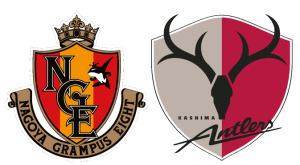 In which places are Kashima and Nagoya right now?

Nagoya Grampus have had a bad season and are currently 10th in the league with 20 points. Kashima Antlers are right below the top at 2nd place and already have 33 points.