In this J1 League fixture, top-four contenders Nagoya Grampus host Shimizu S-Pulse at the Toyota Stadium on Sunday, August 29. The Grampus are on a four-match winning streak while S-Pa are winless in their last seven competitive outings.

Four more points and Nagoya Grampus would have twice the tally of Shimizu S-Pulse in the J1 League. The Grampus are on a four-match winning streak, while S-Pa are winless in six league outings. Moreover, the hosts have defeated the visiting S-Pa in their last four H2H duels and should make it five given their prolific winning form.

The Grampus are not a free-scoring side and when the goals dried up for them, so did the results. All this while, their defence held its end of the bargain. With the goals appearing again, enough to give them the advantage, Nagoya Grampus are back to winning ways. As S-Pa struggles to put scores together, we expect the Grampus to force the issue in a low scoring affair and take home the three points on offer.

Shimizu S-Pulse has been shut out in three of their last four competitive fixtures. That tally is set to increase to four as they visit the Toyota Stadium. Only one side has scored in each of Nagoya Grampus' last seven competitive outings, with the Grampus keeping five clean sheets in the process. Consequently, we are favouring just one side to trouble the scorers in this J1 League fixture.

After seeing their season objectives rocked by inconsistent displays, Nagoya Grampus are back to winning ways. While they continue to progress in the Emperor's Cup, it is their performances in the J1 League that have been noteworthy. The Grampus are on a three-match winning streak in the Japanese top-flight football, gaining the lost footing over their rivals for a top-four placement.

The last time Shimizu S-Pulse enjoyed the three points on offer was at the start of July. Barring their success in the Emperor's Cup, from which they have been knocked out since and remain winless. They have lost thrice and drawn an equal amount of games. The task at hand is great for them as they have lost four matches in succession to the Grampus.

FAQs regarding Nagoya Grampus vs Shimizu S-Pulse Coverage and Accessibility 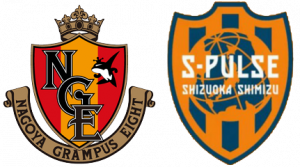