Nagoya Grampus has only one win from five games they have played so far while Shonan hasn’t won any from their six matches in the new J-League season. Will the visitors face annihilation in this trip to Toyota, Japan? Read this J-League match preview for find out our expectations for this game, including free predictions and betting tips

This fixture between Nagoya Grampus and Shonan Bellmare has seen both sides bag five draws, three wins for Nagoya and six wins for Bellmare in the previous 19 encounters. The visitors haven’t won in the last two trips to Toyota Stadium. Will they upset the balance of things in j-League as currently constituted? Here are our best three tips and predictions for this J-League game.

The struggles these teams are currently undergoing make it difficult to back goals on both ends of the pitch. And even when we look at H2H, four of the last five duels didn’t register goals on both sides of the pitch. Moreover, Shonan Bellmare is struggling to score goals and after losing four and drawing one of their last five games in all competitions, we don’t see them scoring against Nagoya in this trip to Toyota Stadium.

A few goals is also a likely outcome in this game. Noting that six out of the last eight duels between Nagoya and Bellmare had U2.5 goal and also the current state of these teams, we don’t expect a high scoring duel in this first meeting of 2022 J-League season.

Nagoya Grampus has the advantage to win the match on Wednesday 6th April, 2022. The hosts have home support and a better form that their matchday opponents, Shonan Bellmare. Moreover, Nagoya lost only once to Shonan Bellmare in the last nine matchups. Notably, Nagoya hasn’t lost on home soil after bagging 1W and 2D in three home fixtures. It is a sharp contract to Shonan Bellmare’s away record of 2 losses in two trips whereby they leaked four and scored only a goal. 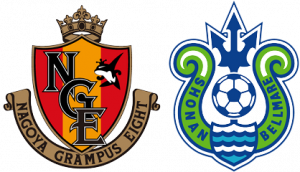 How many goals have both teams scored thus far?

What is the defensive record of these teams so far?

Nagoya Grampus has leaked 6 goals while Bellmare has conceded 9 goals in six games.