Nantes will face Rennes in a match that might give us a good idea about what we can expect from the two teams in the new season.

Rennes and Nantes are two of the better teams in Ligue 1 and we can expect a cool match even though it is a friendly. Here are our predictions.

Nantes and Rennes have a lot of history between them and most of the matches between them are really competitive and difficult. Five of the last seven games they played against each other finished with less than 2.5 goals. Rennes have been having more goal-packed games than Nantes lately and this is a friendly game, so anything is possible and it is always difficult to predict. But even so, we expect an under.

Rennes are the better team out of the two although the difference is not that huge. Rennes have the second-strongest atttack in the entire Ligue 1 and they have shown us some of their true potential in the friendly games to date. They beat Augsburg 2:3 and won against Caen with 1:2. We think that they will have more chances in this match and we generally expect them not to lose this match.

We are going against the expectations here because we expect a better performance from Rennes than what we saw to date. Nantes did not impress us too much in their first two friendlies although they beat Lorient. Rennes have one of the best defenses in the entire Ligue 1 and we expect to see some of that in this match.

Nantes had an incredible last season. They did not achieve much in the championship but the team shockingly won the Coupe de France after beating Nice in the final. It was shocking to even see them reach this far but this triumph put them directly into the UEFA Europa League and we will be seeing a lot more from Nantes this season. The team has an okay attack and defense but there is a lot of room for improvement.

Rennes have been one of the top teams in France for years now and they are a regular in the Europa League and other international competitions. The team had a great last season and could have been a contender if PSG were not that strong. As mentioned above, Rennes have the second-best attack in the entire league and one of the better defenses. Their goal difference after 38 rounds was 82:40.

Top Betting Odds and Stats for Nantes vs Rennes

FAQs regarding Nantes vs Rennes 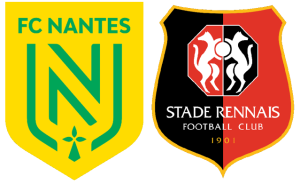 This fixture has been scheduled for 16:00 UTC on Wednesday.

In which places did these teams end in the domestic championship last season.

Rennes and Nantes both ended in the upper half of the table – Nantes finished in 9th place while Rennes were all the way up in 4th place.