Two of the most solid teams in League Two face each other in a match from the 40th round in the league and this will be a game that decides a lot in the play-off race.

Newport have not won a match in two consecutive games and this might be a crucial factor for their promotion race as there are multiple teams that have the same number of points now. This match against Exeter will be one of the most difficult challenges this season.

Newport and Exeter are two of the teams that have had the most goals in their games this season and the highest numbers of games with over 2.5. Newport had over 2.5 in 23 out of 39 games while Exeter in 20/38. The first match between them this season ended in a 2:2 draw and this result is highly possible again with their current forms.

As mentioned, we expect another draw between Newport and Exeter here as both teams are among the best and they will not want to lose this match. The win is important but even a point in such a difficult fixture can make the difference in the final rounds later. The three most recent head-to-head games between them from this and the previous season all ended in draws – 2:2, 0:0, 1:1. We expect another 2:2 here.

Newport actually have the third-cheapest teams in terms of value but that has not stopped them from being one of the best in the league. They scored some solid transfers recently with Jermaine Hylton coming from the Scottish Premiership and Joe Day coming from Cardiff in the Championship. Overall, they are a solid side that can score goals and they are strong at home.

Exeter are another one of the lowest-valued teams in the league but they have been incredible in recent months and deservedly are near the top of the league. They actually still have serious chances to overtake Forest Green for the championship if the current leaders continue with their bad form.

Top Betting Odds and Stats for Newport vs Exeter

FAQs regarding Newport vs Exeter 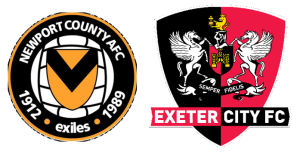 In which places are Newport and Exeter?

Both sides are in the play-off zone at the moment – Newport are 5th right now with 63 points and five other teams with the same number of points. Exeter are higher at 2nd place right now with 68 points.

This match will be played at Newport's home ground – Rodney Parade.