Newport face Hartlepool in the first game of the 38th round in League Two. With a win and some luck, the hosts could reduce the point deficit to four points from the top.

Hartlepool's rough month continued with an unexpected home loss to Bradford. Now, they will face one of the strongest teams in the league over the past few months.

Newport have been outstanding these past few months and are now one of the three highest-scoring teams in the league. They have scored 60 goals in 37 games to date. Hartlepool are quite the opposite case, however, but there is one more factor that benefits us – Newport also concede a lot of goals – 46 in 37 games to date, which is the worst defense in the entire upper half of the table.

Newport have been outstanding and lost just 3 games out of their last 15. Hartlepool, on the other end, have been in bad shape overall and more importantly – they are one of the weakest away teams in the entire league. Hartlepool have won only 15 points in 18 games which ranks them as the 4th weakest away team in the league. Newport should have an easy task against them.

Newport are one of the teams with the least losses this season. Their most recent form puts them at the top – four wins out of the last five games. They have had some stuggles at home this season although they lost only three times. The problem is their large number of draws. Nevertheless, they play well at the moment.

Hartlepool have been one of the better home teams in the league but that's where the good ends for them. On the road, they have been a terrible side and this form has not changed over the course of the entire season. Now, it is even worse because they have started to lose at home too. Overall, Newport should be a level above them in all aspects.

Top Betting Odds and Stats for Newport vs Hartlepool

FAQs regarding Newport vs Hartlepool 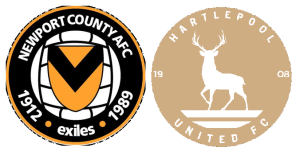 In which places are Newport and Hartlepool?

Newport have a real chance to reach the absolute top of the league after Forest Green continued with their poor performances. Currently, they are 3rd with 62 points while the leaders have 69 points. On the other end, Hartlepool are sitting in the middle of the table and that is where they will end the season – 12th with 48 points.

This match has been scheduled for 19:45 UTC on Friday.