Newport and Mansfield lock horns at Rodney Parade in League Two on Saturday. Two of the division’s strongest outfits go head-to-head in Wales. Read our free predictions and find the latest odds for the fixture below in our detailed match preview.

Mansfield put their 11-match unbeaten streak on the line when they travel to take on Newport on Saturday. Read our top three predictions for this weekend’s fixture below.

Sixth-placed Mansfield are in the midst of a superb 11-match unbeaten surge in League Two and they will back themselves to gather more points against playoff rivals Newport this weekend. The Exiles have claimed just one point from the last nine on offer and their 3-3 draw against struggling Oldham last time out was a confidence-shattering result. Mansfield haven’t lost on the road since November and we recommend siding with The Stags in the double chance market.

With quality in attack in both camps, we’re tipping Newport and Mansfield to register goals at Rodney Parade on Saturday. The Exiles have failed to notch just once in their last nine assignments on home soil, while Mansfield have rattled the net in all but two of their last 11 tests in League Two. Two reliable goal-getting teams will be on show in Wales this weekend, so back both to score.

Dom Telford is going toe-to-toe with Forest Green’s Matt Stevens in the race to win League Two’s Golden Boot this season and the Newport striker rarely lets a chance to score pass him by. Telford’s effort against Oldham was his 21st goal in 22 league appearances since August. The 25-year-old’s strike rate is incredible and we’re tipping Telford to make his mark again against Mansfield.

A run of two defeats and one draw in three matches is a poor return for a team with playoff aspirations and Northampton have slipped down to seventh spot in the League Two standings. The Exiles missed a big chance to find their footing against second-from bottom Oldham last weekend and their 3-3 draw with the Latics was a disappointing outcome. Kevin Ellison and Timmy Abraham both sat that game out, but the injured duo could return this weekend.

Mansfield were held to a 0-0 draw at Bristol Rovers in their last fixture, though it’s testament to the Stags’ improvement under Nigel Clough that their result against the Pirates was seen as an upset. Town’s excellent form has pushed them to within touching distance of the automatic promotion berths and with key midfielder Stephen McLaughlin back in the fold this week, Town can inch closer to the top three.

Top Betting Odds and Stats for Newport vs Mansfield

Below you can find the top stats for Saturday’s game alongside a tool to help you pick the best odds. 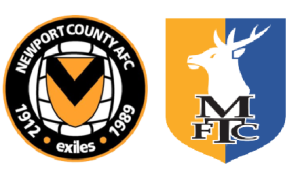 Neither club is in with a shout of winning the League Two title this term.

Newport have been priced as favourites to beat Mansfield by the bookmakers.