Newport and Northampton go head-to-head for three League Two points on Tuesday. Read our free predictions and find the best odds for the fixture below in our match preview.

Newport can leapfrog Northampton in the table with a victory over The Cobblers on Tuesday. Read our top three predictions for this week’s fixture below.

Newport finished a tough run of four away game in five League Two fixtures by earning a point at high-flying Harrogate on Friday (2-2) and back on home turf for just the second time this season, we’re tipping The Exiles to prevail. Northampton have scored only once goal in their last three matches on the road combined and we’re backing the hosts to outgun the shot-shy Cobblers in Wales.

Northampton are averaging less than a goal per game in League Two so far, though defensively, they have been difficult to breach. As a result, five of their first six assignments of the campaign produced under 2.5 goals and their well-marshalled backline and misfiring attack should combine to deliver another game of few chances at Newport.

Newport and Northampton share a remarkable statistic this season where four of their respective six League Two fixtures since the summer have been level at half time. The teams will meet on Tuesday as two of the strongest sides in the division, so a chess-like battle could develop in the first period before things heat up later on. With that considered, backing another draw in the half time result market could prove profitable.

Top Betting Odds and Stats for Newport vs Northampton 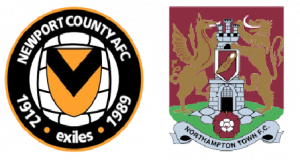 Tuesday’s game will be played at Rodney Parade.

Northampton beat Newport 2-0 when the teams last met back in September 2019.