Newport and Stevenage meet at Rodney Parade in England’s League Two on Saturday. Read our expert predictions and find the top odds for the contest below in our match preview.

Newport are unbeaten in five games ahead of their clash with Stevenage on Saturday. Read our top three predictions for this weekend’s fixture below.

Stevenage are in the midst of a rotten run on the road and having lost five of their last six away matches in League Two, Borough are worth opposing when they visit Wales to play Newport on Saturday. The Exiles have only tasted defeat once at Rodney Parade this term and after their superb 3-1 victory at Bristol Rovers last time out, County should be armed with enough confidence to prevail again.

Newport have been attacking with plenty of conviction of late, indeed, they have hit the net at least twice in an impressive four of their last five League Two assignments. Stevenage meanwhile, have shipped six times in their last two away tests in the division combined and with their defence looking shaky, we recommend backing Newport in the over 1.5 team goals stakes.

With four goals in his last two appearances, Newport attacker Dom Telford has been in electric form in recent weeks. The frontman has notched six times in seven games in League Two overall this term, and it’s worth noting that four of his efforts were registered at Rodney Parade. Telford tends to turn on the style in County’s home matches and that makes him a worthy candidate in the anytime goalscorer market this weekend.

Aneurin Livermore is rated as a doubt this weekend for Newport, while Scott Bennett, Priestly Farquharson and Courtney Senior have been ruled out with injuries. Ryan Haynes is back again following his one-match ban, though Ed Upson remains suspended. Newport are hovering down in 12th place at present, though a win on Saturday could fire them into the playoff positions.

Brad Barry, Charlie Carter and Chris Lines could be absent from the Stevenage midfield this weekend while James Daly and Arthur Read are two possible absentees up front. Borough failed to score for the third fixture on the spin when they drew 0-0 at home to Leyton Orient last week. Stevenage are just one poor result from dropping into the bottom two.

Top Betting Odds and Stats for Newport vs Stevenage 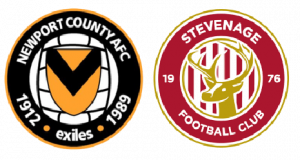 We recommend using the odds at NetBet for Newport vs Stevenage.

Newport are favourites to beat Stevenage this weekend.