The promotion race in League Two has by far been incredible – about 10 teams have about the same chances in the middle of the season and Newport and Sutton are two of those teams that have been performing above average.

Newport and Sutton have not played against each other in 13 years – since both sides were in the National League. Curiously, Sutton got promoted to League Two at the start of this season but the team has already proven its ambitions to reach even higher next year – they are among the teams with the highest number of wins since the start of this campaign. Newport vs Sutton will be an incredible game and both sides have an equal chance to grab the three points.

Generally, Sutton are not among the best choices for Both teams to score bets as they have had a lot of matches when this did not happen and there were no more than 1-2 goals total. Nevertheless, Newport are quite good on the offensive side of the game and they have scored in 6/8 home games in the league to date. Given that the team has one or two fewer matches at home this season, this means that the team has had the strongest attack in the league. We expect them to score on Tuesday despite the fact that Sutton had several games when they didn't concede.

Sutton are not a team to bet on draws, at least, in most cases. They have had the lowest number of draws since the start of this campaign, both of which were away from home. Newport, in turn, have had 7 total and their two most recent games ended in this way. What's important here is that those two teams are absolutely equal in strength and are generally in good form. We expect this match to be difficult for both sides and we expect a goal-packed draw.

We mentioned that Newport's attack has been the most effective offense in the league with 15 goals in just 8 home games. Sutton might have had several games in which they did not concede but overall, they have conceded 13 goals in 10 away games this year. Newport will have a lot of chances and it depends on them to score. We expect them to succeed and even more than once. Overall, we expect this match to end with a result in the range of 2:2. Newport already had two such draws at home this season, so this is another positive fact for our bets.

Top Betting Odds and Stats for Newport vs Sutton

FAQs regarding Newport vs Sutton 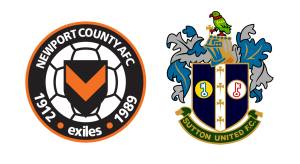 • In which places are Newport and Sutton?

As mentioned in the beginning, Newport and Sutton are in the promotion fight and are near the top of the standings. Surprisingly, Sutton are 6th with 32 points while Newport are 9th with 28 points. A win here for either side will cause a serious shift in the standings.

This match will be played at Newport's home ground – the Rodney Parade stadium, which has a capacity for 8,700 spectators.