Two of the main contestants for promotion in League Two face off in a match from the 34th round – Newport will host Tranmere on Saturday.

Newport and Tranmere have a lot of history between them and the matches have always been shockingly goalless. It seems like these two teams cannot score goals against each other. Will we see a surprising result with goals or will this be another difficult game for both teams?

We think that this match will either end in a 0:0 or a 1:1 draw. We already explained that there have never been more than two goals in the games between them and it will be a surprise to see many. Tranmere have not been the best on the road and are the team with the most draws apart from Leyton Orient – they had 7 draws in 16 games. Newport also had a bunch of draws at home – 5 out of 15 games this season. These two teams have not had a draw in a while but this season, they have been almost equal in strength, so we expect to see one.

We expect a low number of corners in this match. Neither side is among those that have taken the most corners this season – Newport took an average of 4.69 per game while Tranmere took 4.67 per game. While the previous game between them had exactly 11 corners, most of the older h2h games had less than 10. Most of Newport's recent games had less than 11 corners – 5 out of the last 7 games. There is no reason to expect a high number of corners when Tranmere play the best defense and the most passive offense in the league and the games between these two teams have never been attacking.

Top Betting Odds and Stats for Newport vs Tranmere

FAQs regarding Newport vs Tranmere 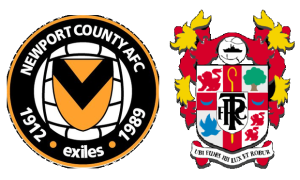 • In which places are Newport and Tranmere?

Both sides have the same purpose this season – to get promoted to League One. Tranmere have been more successful to date and remain at 3rd place with 56 points. Newport are right below the promotion zone at 8th place with 49 points.

This game will be played at Newport's home ground – Rodney Parade, which has a capacity for 8,700 spectators.