Nordsjaelland and AGF are both targeting their first wins of the new Superliga campaign in Denmark when they meet on Sunday. Read our expert predictions and find the latest odds for the fixture below in our match preview.

Nordsjaelland are aiming to bounce back from their opening day defeat last weekend when AGF visit the Right to Dream Park. Read our top three expert predictions for Sunday’s fixture below.

With three victories in their last four encounters with them, Nordsjaelland’s recent record against AGF is strong and the hosts could be worth backing in the double chance market on Sunday as result. AGF’s trip to the Right to Dream Park this weekend is sandwiched in between two Europa Conference League qualifiers against Larne from Northern Ireland and the rigours of their continental responsibilities could make them vulnerable against Nordsjaelland.

Four of the last six Superliga skirmishes between Nordsjaelland and AGF produced goals at both ends and the bettors could be rewarded by sticking to the BTTS market again on Sunday. Nordsjaelland and AGF both scored and conceded on the opening weekend of the new campaign in Denmark and we expect chances to be created at either end again on Sunday.

Last season, Nordsjaelland were every inch a second-half team at home, where they notched 17 of their 26 goals for the campaign after the interval. Similarly, AGF often took a while to get going on the road and 21 of their 29 goals were struck in the second half of their away matches. With those patterns considered, backing the second half to see more action on Sunday looks a smart move at the prices on offer.

With star winger Kamaldeen Sulemana lost to Rennes during the summer transfer window, Nordsjaelland could find it tough to match last season’s 5th place finish in the 2021/22 Danish Superliga. The Tigers have an incredibly youthful squad and manager Flemming Pedersen has yet to make any significant purchases as we approach the transfer deadline.

AGF were left red-faced in midweek when they were turned over in surprising fashion by Northern Irish outfit Larne in the Europa Conference League qualifiers. The Whites can still turn things around in the second-leg back in Denmark, though that crucial tussle next week could see their focus slip when they take on Nordsjaelland on Sunday.

Top Betting Odds and Stats for Nordsjaelland vs AGF 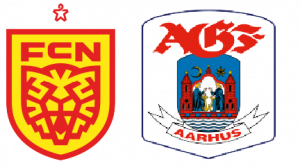 Sunday’s game will be played at the Right to Dream Park.

Nordsjaelland won a friendly encounter between the teams 1-0 back in June.