Two teams with completely opposite ambitions this season meet each other in a fixture that was supposed to be played a month prior. Northampton will face Barrow in a crucial match that could send them almost at the top of the league.

Northampton had a couple of postponed games and currently, they have played one or two matches less than their direct opponents for the promotion. With a win here, they can get to the 2nd place in the league.

Barrow have not been performing well lately and overall, their season has been disappointing. Northampton also had a series of disappointing results and need to find their way back to the right track if they want to remain a contender for promotion. They won the previous game against Salford and this upcoming fixture against Barrow is the perfect chance for another good result. The visitors lost four out of their last five games and overall had no chance in any of those. We know that Northampton are the much better team and they simply need to improve.

Why do we expect that Barrow will not score a goal here? Well, the team is in a terrible form and although they scored in most of their recent games, Northampton have a really good defense. Only one team has conceded as few goals as them at home this season – 9 in 13 home games. On the other side, Barrow have not been as good on the road and scored 12 goals in their 13 games – in 5 of those, they did not score goals at all.

Top Betting Odds and Stats for Northampton vs Barrow

Top Betting Odds and Stats for Northampton vs Barrow

FAQs regarding Northampton vs Barrow 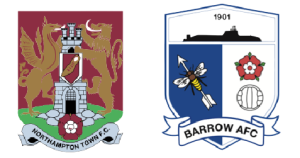 • In which places are Northampton and Barrow?

Northampton's recent losses and draws put them out of their comfortable position in 2nd place and the team is now 5th with 45 points. Barrow remain near the bottom of the table but safe enough from the relegation zone – 21st with 26 points.

• Where will the game between Northampton and Barrow be played?

This match will take place at Northampton's home ground – the Sixfields Stadium, which has a capacity for 7,798 spectators.