Northampton have been incredible in League Two since the start of the season. The team that got relegated from the upper tier last year will surely return back to its place at the end of this season. Before this happens, however, they have an important match for the EFL Trophy that could qualify them for the next stage.

Northampton need the three points to qualify for the next stage and Brighton U21 are perhaps one of the easiest opponents that they could have for such an important match. Not that both teams do not have a chance but Northampton will surely be the team to pursue the victory here with more efforts.

Northampton are the second-best home team in League Two. Their performance proves that their relegation from last season should not have happened and their place is in the upper tier. The team is in amazing form with 4 consecutive wins (3 of which at home) while Brighton U21 have not won an EFL away match since 2019. If you are unaware, the U21 formation participates in the EFL trophy only and is not an official team that plays in any domestic league. We expect Northampton to win this match in regular time.

Northampton have been impressive this month, especially at home. They have scored 8 goals in their last 3 home games and at the same time did not concede even a single one. Their tournament matches have not been as impressive, however, and they scored one goal in each fixture only. This time they will be playing against the weak team of Brighton U21 and the stakes are higher. We expect to see at least 2 goals from the hosts given their motivation and current form.

Team To Win To Nil – Northampton

Here is an option for people who search for higher odds – Northampton to win without conceding a goal. If your bookmaker does not have this market as an option, you can replace it with a Both teams to score (No) bet but at lower odds. We simply believe that Northampton will win this match in regular time without conceding a goal. They have not allowed a goal in 4 consecutive matches against higher-tier opponents. The odds here are incredible and deserve a bet.

Top Betting Odds and Stats for Northampton vs Brighton U21

FAQs regarding Northampton vs Brighton U21 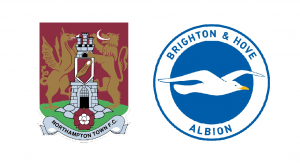 • In which places are these two teams in their EFL Trophy group?

This will be the third and final match for both sides in the EFL Trophy group stage. Northampton are underperforming but still have a good chance to succeed, especially if Forest Green lose.

• How many goals have Northampton scored at home this season?

We are counting only the matches in League Two for these statistics. Northampton have played 8 matches to date and have scored 13 goals.