Northampton's last game was a complete surprise – the team lost 5:2, which is unbelievable after their incredible run in recent weeks. Now, they need to step up against Crawley, who also appear to be surprisingly good after a bad first half of the season.

Northampton appear to be one of the teams that will certainly get promoted to League One again. Yet, although they are near the top, they cannot let their guard down and need to keep up this level for a few more months. Crawley had a bad start but their recent rounds pushed them closer to the important part of the table and the team can truly become a contender with a few more positive results.

In most cases, we would bet against Northampton to concede in a home game but Crawley seem to be at the top of their game and we expect them to score at least once here. Still, Northampton have conceded just 7 goals in 10 home games this season which is one of the best records in the league. On the other side, Crawley scored 11 goals in 10 away games, which is not impressive but they managed to scored at least once in 7 consecutive games. The odds here are incredible, so it is a great option for a bigger betting slip.

After losing their first match of the year with 5:2, we expect Northampton to step up and remind us why they are the second-best team in League Two. Crawely lost just one of their last 5 league games but we expect this match to go in Northampton's favor. After all, the hosts are one of the strongest teams at home in League Two. They won 7 out of their 10 games in front of their crowd and actually have a 5-game winning streak at home. The team will certainly want to compensate their fans for the terrible loss and win their first fixture at home for the year.

Northampton haven't impressed us with a unique number of goals this season at home but they scored 16 in 10 games, which is above average. Our basis for this bet is the fact that Northampton will be extra motivated for this fixture. After that dissapointing loss, we expect nothing else from one of the strongest teams in the league. Crawley might be in good form but there is still a difference in class between these teams and we expect Northampton to come on top with at least 2 goals.

Top Betting Odds and Stats for Northampton vs Crawley

FAQs regarding Northampton vs Crawley 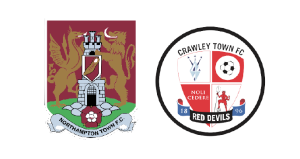 • In which places are Northampton and Crawley?

As mentioned already, Northampton are one of the strongest teams in the league. In fact, they are 2nd after Forest Green and it seems like this is the max for this season – the leaders are simply too good at this point. Crawley, on the other hand, have been improving and are currently 14th with 28 points.

Crawley's earlier problems are evident in their negative goal difference – 26:31. Northampton, on the other side, have been quite better with 31 goals scored in 22 games and 22 conceded.

This match will begin at 15:00 UTC on January 8, which is this Saturday.