Northampton take on struggling Rochdale at the Sixfields Stadium in a League Two clash on Saturday. Read our expert predictions and find the best odds for the fixture below in our match preview.

Northampton put their perfect start on the line against relegation candidates Rochdale this weekend. Read our top three predictions for Saturday’s contest below.

Northampton have made a bright start to the 2021/22 campaign, recording victories in each of their first two League Two fixtures alongside beating Championship side Coventry in the Carabao Cup. With spirits high and momentum to burn, we’re tipping The Cobblers to put their best foot forward again on Saturday against a Rochdale team still searching for their first win of the season.

Both meetings between Northampton and Rochdale last season produced under 2.5 goals and the teams’ latest tussle on Saturday could follow a similar pattern. Northampton’s first two league matches of the new campaign both finished 1-0 in the Cobblers’ favour, while Rochdale managed to notch just once in their last two League Two assignments.

Jon Brady’s Northampton have been quick out of the blocks so far this season and The Cobblers raced into and held on to a first-half lead in each of their opening two League Two tests of 2021/22. It’s worth noting that three of the five goals conceded by Rochdale so far were shipped inside 45 minutes and with that early record considered, fast starters Northampton look an excellent price in the half time result market.

Northampton are one of only three clubs to still hold a perfect start in League Two after their flying start to the campaign and The Cobblers’ surprise victory over Championship outfit Coventry City in the Carabao Cup highlighted just how much confidence they are playing with. Northampton had the luxury of facing ten men for large periods of their first two league matches however, and it will be interesting to see how Jon Brady’s men cope against a full complement of players this weekend.

Tipped by many to go down in 2021/22, Rochdale have done little to reverse their pre-season assessments in the opening exchanges of the new campaign. The Dale collected just one point from their opening three League Two matches and already they hold the joint-worst defensive record in the entire division.

Top Betting Odds and Stats for Northampton vs Rochdale 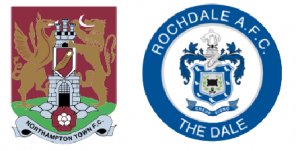 Saturday’s game will be played at the Sixfields Stadium.

Northampton and Rochdale drew 0-0 when they last faced off on February 23.