Attentions turn to the Sixfields Stadium on Saturday where Northampton host Salford in League Two. Two of the division’s playoff chasers lock horns in the East Midlands. Read our free predictions and find the latest odds for the fixture below in our detailed match preview.

Northampton are winless in four games in League Two ahead of their clash with Salford on Saturday. Read our top three predictions for this weekend’s fixture below.

Salford have started to pick up the pace in their attempts to land a playoff spot in League Two and having won three of their last four away matches, the Ammies are fancied to leave the Sixfields Stadium with a positive result on Saturday. Northampton will start the game ahead of Salford in the table, though the Cobblers are winless in four fixtures and that poor run means they are worth opposing this weekend.

When Northampton and Salford last met back in September, they went toe-to-toe at The Peninsula Stadium in a pulsating 2-2 draw. That was the second time in as many encounters where both teams found the net and the same market appeals at the prices on offer this weekend. Salford have failed to score just once in 13 away fixtures in League Two since August, while The Cobblers have notched in all but two of their 12 home matches this term. The teams’ both look capable in the final third so expect action in both penalty areas.

Salford have developed a knack for starting quickly on the road in recent months and the Ammies were able to break the deadlock in each of their last six away matches. That remarkable run should arm them with the impetus to attack Northampton from the first whistle on Saturday and that in turn creates a window of opportunity for bettors to back Salford to opening the scoring again.

Northampton’s 5-2 loss at Swindon on January 1st has definitely knocked the Cobblers out of their stride and Town have failed to win in three attempts since. Jon Brady’s side did however, face a tough gauntlet of games during that period including tests against league leaders Forest Green and highflying Sutton. Nevertheless, poor results are poor results and Northampton have slipped out of the automatic promotion berths in League Two.

Salford’s 2-0 win at Barrow in midweek felt like a significant moment for Gary Bowyer’s team and though the Ammies have played more games than the teams around them, they are now within just four points of the playoff positions. Salford need to keep stringing wins together to stay in the mix and their chances should be enhanced by the return of Josh Morris and Brandon Thomas-Asante from injury and suspension respectively this weekend.

Top Betting Odds and Stats for Northampton vs Salford 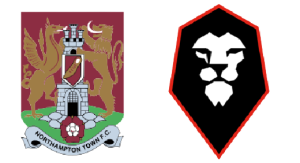 Northampton have been priced as favourites to beat Salford this weekend.

Saturday’s fixture will be played at the Sixfields Stadium in Northampton.