Northampton and Sutton meet at the Sixfields Stadium on Saturday where three League Two points will be on the line. Read our free predictions and find the latest odds for the fixture below in our detailed match preview.

Sutton continue their search for a first away win of the campaign when they travel to take on Northampton. Read our top three predictions for this weekend’s fixture below.

Sutton have been every inch a Jekyll and Hyde team this season, mixing some superb results at home with some terrible ones on the road. The U’s have only claimed two points from their first four away tests this term and their habit for coming unstuck on their travels means they are worth opposing when they visit a Northampton side that has lost just once in seven matches in all competitions.

Bettors on the lookout for goals this weekend are advised to look elsewhere however. Northampton are averaging just 1.25 goals per 90 minutes at the Sixfields Stadium this season, while Sutton have notched just twice in 360 minutes of football on the road since their promotion. With creativity in short supply in both camps, we’re tipping under 2.5 goals to be registered this weekend.

Northampton have been consistent performers in one market this season, especially on home soil where they have been drawing with their opponents in three out of four fixtures since the campaign kicked off. The Cobblers have scored just two first half goals at the Sixfields Stadium this season, while Sutton have conceded just once in the first half on the road. With compelling evidence in every direction, backing a draw in the half time result market again appeals at the prices on offer.

Joseph Mills and Sid Nelson are both rated as doubtful for Northampton, though manager Jon Brady has few injury concerns beyond that. The Cobblers almost secured three points at Salford last time out, though they were denied by a last-minute equalizer from the hosts. Town have lost just once in six League Two contests overall.

Omar Bugiel, Jonathan Barden, Tobi Sho-Silva, Kenny Davis and Ricky Korbo are all considered doubts for Saturday’s match. Sutton have won four of their last five games in league and cup, though all of their victories were secured on their own patch. Away from home, the newly-promoted side continue to struggle.

Top Betting Odds and Stats for Northampton vs Sutton 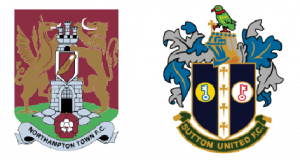 William Hill have got you covered for all the best prices in League Two.

Is either club expected to be in the running for promotion?

At 3/1, Northampton are among the favourites for promotion from League Two this season, though Sutton (9/1) aren’t considered a threat.