Monday’s Indian Super League comes from Guwahati as NorthEast United play host to Hyderabad. It’s a fascinating match up between two teams who find themselves at differing ends of the table. Hyderabad, currently lead the way whilst NorthEast find themselves marooned towards the bottom. In a crucial clash, both teams will seek three vital points to help maintain their respective pushes  at the top and bottom of the league.

Despite both of these teams sitting in the top half of the table, both of these teams enter this matchup needing to pick up their form. In the current form table Hyderabad sit in 5th spot having taken eight points from the last fifteen available, NorthEast United sit at the bottom having taken just two points from their last fifteen. NorthEast United certainly have more than a punchers chance here, but they do face a side in Hyderabad who have the best away league form in the league, with the league leaders taking 13 points from a possible 24 this season. NorthEast at home have been nothing short of horrific in the league having only taken 7 points from a possible 21. They face another uphill task here and the smart play has to be on the league leaders to maintain their lead at the top of the table.

When predicting whether this game will see over or under 2.5 goals is a hard call to make, but we will just side with the over here. Three of the last five contests between the sides have seen over 2.5 goals. Outside of the head to head clashes these sides have been involved in games containing plenty of goals, NorthEast have seen over 2.5 goals in three of their last five whilst, Hyderabad have seen the mark in two of their last five games. In a match both teams will be desperate to win, we think this could be an open game that sees plenty of goals.

The Best Match Odds for NorthEast United vs Hyderabad 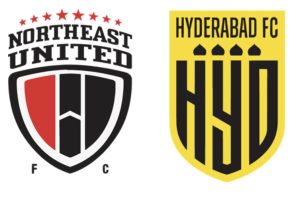 This game will be played at the home of NorthEast United at the Indira Gandhi Athletic Stadium.

Bartholomew Ogbeche is continuing his fine goal scoring for Hyderabad and is the top scorer in the league by a margin of four goals. Although he didn’t score in Hyderabad’s last game Ogbeche is in great form following a hat trick that was scored two matches ago.

What is the kick-off time for NorthEast United vs Hyderabad?