Notts County looks to retain their three-matches winning streak when they host Halifax Town for their next league engagement. The Shaymen lost their last game against the same rivals in the FA Trophy.

Notts County has gained their momentum back by winning consecutive three games in various competitions. The hosts will also be more confident with their second last victory against Halifax and have the home advantage this time as well. While on the other hand, the Shaymen had been going through a long run of unbeaten games but the visitors have now lost three of the previous four games. So we expect the Magpies to collect three points this midweek.

Four of the last five H2H meetings between Notts County and Halifax ended with a high-scoring total. Notts County’s attack was impressive in the recent games and they produced ten goals in just the last three games. Halifax also has scored six goals in the previous five attempts. Based on the given numbers, we predict to see the same pattern of recent H2Hs to be followed in this match.

Notts County has shown great consistency in terms of scoring goals at their home stadium, scoring in all of the recent attempts. The hosts scored at least two goals per game in seven of the last eight home games. While the Shaymen are also scoring consistently from the last three games. Adding more, all of the last five H2Hs of these teams witnessed BTTS outcomes. So we expect the same kind of pattern for this game as well.

The Magpies registered a consecutive second home win of the National League in their last game against Eastleigh. Notts County has been confident in most of the home games this season by winning seven of the last nine home attempts. After winning 14 games out of 26, the team stands at the eighth position in the points table. There is no injury issue in the squad before this game.

The Shaymen have been able to get the second most numbers of wins so far in the season. Standing at the fourth spot with 50 points, Halifax Town has a difference of 11 points and three games to play. The team hosted the same rivals in their last game but lost by leaking a goal at the 86th minute of the game. The manager Pete Wild has zero fitness concerns in his squad coming into this game.

Top Betting Odds and Stats for Notts County vs Halifax

FAQs regarding Notts County vs Halifax Coverage and Accessibility 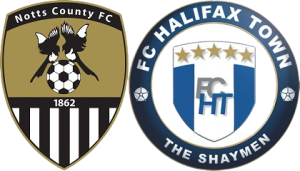 Where is the game being played? Meadow Lane (Nottingham).

Who won the last Head to Head fixture? Notts County won with a 1-2 scoreline.