Round 16 of the 2. Bundesliga will include several important fixtures that could create serious shifts in the standings – Nurnberg vs Holstein Kiel is one of those curious games.

Nurnberg have had a serious fallout in recent weeks with those three losses in the last 5 games. Holstein Kiel, on the other hand, have had several positive results in recent weeks, which put them at a much better spot in the standings.

Nurnberg's recent problems have mainly been in defense. The team has been conceding a lot of goals lately but it is understandable to a certain extent – they played against some of the strongest sides and direct contenders for the promotion. The problem is that those teams obviously were better.

We have no doubts that Nurnberg will score a goal against Holstein, who are not one of the strongest teams, and concede in almost all of their matches. At least, they have conceded a goal in all 10 of their recent league games. The good thing is that they improved on the offense as well and have scored at least once in 8/10 league games. We should see a thrilling goal-packed game.

It is time for Nurnberg to step up their game if they want to keep their chances for promotion at the end of this season. Earlier on, they were one of the best home teams – that was before their two recent losses and a draw. Holstein, on the other hand, have been average away from home and most of their games ended in a draw. This is an absolutely possible result for Saturday as well, especially if Nurnberg continue to play so weakly. Nevertheless, we believe that they will see this fixture as a great chance to step up their game and win.

Nurnberg have definitely not been among the highest-scoring teams at home this season but that is due to two surprising 0:0 home games in the earlier stages. Overall, Nurnberg have scored more than once in 4/8 games at home this season and it is curious that the times they failed was against some of the weakest teams in the league. Holstein, of course, have conceded at least one goal in all of their away games this season but it is important to note that they allowed 2 or more in 4/8 away games as well.

Top Betting Odds and Stats for Nurnberg vs Holstein Kiel

FAQs regarding Nurnberg vs Holstein Kiel 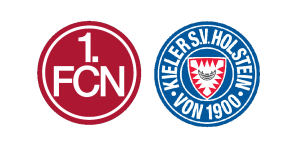 • In which places are Nurnberg and Holstein Kiel currently?

After the series of disappointing results, Nurnberg are 7th with 24 points. Their opponents from Holstein Kiel moved forward and are 12th with 17 points.

This game has been scheduled for 12:30 UTC on Saturday, December 4.

This game will take place at Nurnberg's home ground – the Max-Morlock-Stadion, which as a capacity for 50,000 spectators.