Schalke are confident to end at the top of the table when they travel to Nurnberg for the last game 2. Bundesliga. The Old Master are struggling for a win in the last four league games.

Nurnberg are making turns of defeats and draws from the last four games and have won only one in the previous seven Bundesliga outings. However, Schalke jotted down seven victories in the last eight attempts. Moreover, the Royal Blues will be much more optimistic to play this game, following the recent consecutive four away wins. Schalke are also undefeated in the last five H2Hs, winning three. So we expect the Miners to continue their recent form and collect three points from this game.

Nurnberg are scoring from the last five games consistently, getting only one clean sheet in that interval. The scoring ability of Schalke was not in doubt in the recent games as they have scored in all of the games of this year. In addition, all of the last five H2Hs between these teams finished with both teams on the scoring side. Based on the current stats, we expect the previous trend to be followed in this game.

The Glorious appeared effortless in the last game and lost the away duel by 3-0 against Holstein Kiel. With the help of 14 wins and nine draws, Nurnberg are currently standing at the seventh position in the points table. Felix Lohkemper will miss out on the coming game due to hip problems.

The Royal Blues returned to the home winning sequence in the last game with a victory of 3-2 against St. Pauli. Having the most number of wins, 19 out of 33, Schalke hold the charge of the table with a lead of two points from the second. Danny Latza is on yellow card suspension while Dong-gyeong Lee is injured ahead of this game.

Top Betting Odds and Stats for Nurnberg vs Schalke

FAQs regarding Nurnberg vs Schalke Coverage and Accessibility 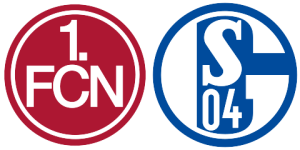 Where is the game being played? Max-Morlock-Stadion (Nuremberg).

Where is the game being televised? Eleven Sports (Por), Sky Bundesliga, Viaplay.