Two teams with ambitions to play in the elite next season meet in a match that could give one of them an impressive lead in the standings. Nurnberg will try to steal the three points from the spectacular team of St Pauli, which is currently at the very top of the league.

Both teams here went through disappointing losses in recent weeks but it appears that those negative results did not cause disruptions in their form. Both sides have since won games and will come into this important fixture with everything they have got.

This is one of those fixtures that could go in countless directions. Each side has the ability to dominate on the field although St Pauli generally are the team that scores more goals. The safest option in such derbies is the both teams to score market as we have two teams with identical ambitions and similar capabilities. We expect to see at least one goal from both teams here and possibly even in the first half alone.

It should be mentioned that Nurnberg are definitely not a team tha concedes a lot at home. After 7 home games, they have conceded just 3 goals but this time, they are facing the current strongest team in the league – St Pauli. We expect the visitors to fight until the very end and find their way to the goal. It should also be mentioned that St Pauli are among the teams that have conceded the most goals in away games despite the fact that they are 1st in the league.

Nurnberg have the second-highest number of draws since the start of the season – a total of 6 in 14 games. They are a strong home team and it is curious that they had some bad results at home against some of the weaker teams in the league. St. Pauli are definitely not among the better away teams in the league and have lost 3/7 games – the most recent one against Darmstadt ended in 4:0.

However, we watched this match and it is safe to say that St Pauli were unlucky in their attempts and despite the end result, they played as equals. Nurnberg are definitely not as strong as Darmstadt currently and we expect this match to end in a draw.

With the previous predictions and coming into this one, it should be obvious that we expect this match to end in 1:1. Nurnberg are a team that does not concede at all, so we do not expect to see more than 1 goal from St Pauli. Plus, we already mentioned that Nurnberg get a lot of draws and St Pauli are definitely not among the better away teams in the league.

Top Betting Odds and Stats for Nurnberg vs St Pauli

FAQs regarding Nurnberg vs St Pauli 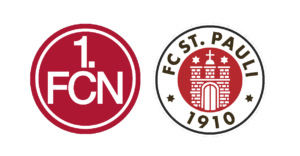 • In which places are Nurnberg and St Pauli?

As described already, St Pauli are in the lead. The top three of the 2. Bundesliga change every week and before this round, St Pauli are 1st. Nurnberg, on the other hand, went through a couple of losses that put them behind in 5th place.

This fixture has been scheduled for 12:30 UTC on Sunday, November 28.

This game will be played at Nurnberg's home ground – the Max-Morlock-Stadion, which has a capacity for 50,000 spectators.