Oldham host Bradford at Boundary Park in England’s League Two on Saturday. Can the Latics continue their mini resurgence against the Bantams in Greater Manchester? Read our free predictions and find the latest odds for the fixture below in our detailed match preview.

Oldham are unbeaten in four games ahead of their latest test against Bradford on Saturday. Read our top three predictions for this weekend’s fixture below.

Oldham still aren’t clear of danger near the foot of the League Two table, though the Latics are certainly showing plenty of spirit in the battle to beat the drop. Athletic have lost just one of their last seven assignments in the division and with seven points collected from the last nine on offer, they should be confident enough to avoid defeat again when a Bradford outfit carrying a run of just one win in five matches visits Boundary Park.

Bradford’s fixtures have been noticeably low on action in recent weeks and Derek Adams’ men have been posting modest numbers at both ends of the pitch. 100% of their last four League Two tussles produced under 2.5 goals, while five of their last seven scuffles on the road have also seen two or fewer goals. We’re tipping that low scoring pattern to continue on Saturday, so stick to the under 2.5 totals line.

With 13 stalemates, Bradford have been one of League Two’s prime draw specialists this season and with many of their ties keenly contested, nine of their 16 fixtures on the road this term have been level at the break. We expect both Oldham and Bradford to play with a degree of caution on Saturday and the chances of the teams being deadlocked at the interval seem high again. With that considered, we recommend backing a draw in the half time result market.

January appointment John Sheridan is still undefeated with Oldham having been in charge for four matches in League Two and the former Republic of Ireland international has had a hugely positive impact so far. Oldham showed plenty of grit to draw 3-3 with ten men at playoff-chasing Newport last weekend, though the player dismissed, Dylan Bahamboula, is suspended and cannot play against Bradford.

Bradford’s 1-0 reverse at home to Exeter last time out felt like a campaign-defining moment and City are now a huge eight points back in the race to secure a playoff berth. With Charles Verman and Lee Angol still out injured, the Bantams are short on reliable goal-getters and their lack of cutting edge in the final third could count against them again this weekend.

Top Betting Odds and Stats for Oldham vs Bradford 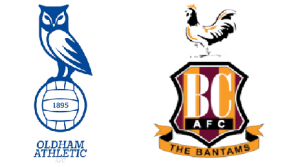 Bradford have been priced as favourites to topple Oldham this weekend.

Saturday’s League Two fixture between Oldham and Bradford will be played at Boundary Park.