Oldham will host Crawley in their final game in League Two before they get relegated to the National League.

This game has no meaning for either team, so we can expect anything.

There is hardly a more goal-packed derby than the one between Oldham and Crawley. These two teams always come out and give us a spectacle when they play. Whatever their stats may be in the current season, we alsways see 3-4-5 goals in their games. All seven most recent games from the past 3 seasons ended with more than 2.5 goals, the last three had more than 4 and 5.

Oldham had all the chances in the world to improve and save themselves in earlier stages of the season but they failed. It has been known that they are getting relegated for weeks and unfortunately, this will be their final match in the 4th tier. They have the 3rd weakest defense in the league with 73 conceded goals in 45 fixtures.

Crawley have had an interesting season and are the team with the fewest draws out of the entire league. They lost a lot more than most sides but also won 17 games out of 45. Their goal difference is negative despite the fact that they are in the upper half of the table – 53:63. This is a team that has a lot of potential but needs to improve on the defensive end.

Top Betting Odds and Stats for Oldham vs Crawley

FAQs regarding Oldham vs Crawley 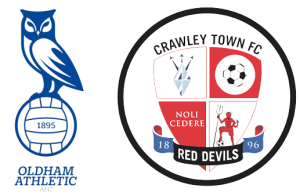 In which places are Oldham and Crawley right now?

These two teams will end in completely different positions. Right now, before the final round, Oldham are second-to-last, which will be their final position. On the other end, Crawley are all the way up at 12th place with 60 points.

This fixture has been scheduled for Oldham's home ground – Boundary Park.