Oldham and Harrogate meet at Boundary Park in England’s League Two on Saturday. Read our free predictions and find the latest odds for the fixture below in our expert match preview.

Can Harrogate get back to winning ways when they visit bottom club Oldham in League Two on Saturday? Read our top three predictions for this weekend’s fixture below.

Harrogate manager Simon Weaver will be frustrated following his team’s run of three draws in four matches, though the Sulphurites could rediscover their winning touch at bottom-club Oldham on Saturday. The Latics have pocketed just one point in four home assignments this term, while Harrogate have already won twice in the road in four attempts during the same period. The visitors have the tools to enjoy more success on the road this weekend.

Only Tranmere have scored fewer goals than Oldham in League Two this season, though Athletic have shown signs of improvement at the back of late. The Latics conceded just once in their last pair of League Two fixtures, though they notched just once themselves at the opposite end. Those stronger defensive displays are something to build on however, and they can use that platform to keep the score down against Harrogate. With that considered, we recommend backing under 2.5 goals to hit the net on Saturday.

New signing Luke Armstrong is already a firm favourite among Harrogate fans and it’s easy to see why. The summer capture has scored six goals in League Two this season for his new employers and it’s worth noting that four of Armstrong’s efforts were notched in away games. The 25-year-old always looks sharp on the road and he should have chances to add to his tally for the campaign at Oldham.

Oldham still have a number of potential absentees this weekend including Ouss Cisse, Jamie Hopcutt, Jack Stobbs, Hallam Hope and Harrison McGahey. There are also concerns about the availability of Danny Rogers, Sam Hart and Nicky Adams. The Latics made light of their personnel issues to beat local rivals Rochdale 1-0 last weekend however, winning for only the second time this season in the process.

Lewis Page is rated as a doubt for Harrogate, though Simon Weaver has a strong squad to choose from elsewhere. Alexander Pattison started last weekend following an injury scare, while Jack Diamond also returned from suspension in the Sulphurites' 0-0 draw with Stevenage. A win this weekend could fire Harrogate up one place to second spot in League Two.

Top Betting Odds and Stats for Oldham vs Harrogate 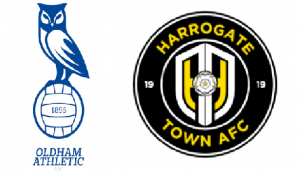 We recommend using Willam Hill’s odds for Oldham vs Harrogate.

Where is this game being played?

Oldham vs Harrogate will be played at Boundary Park on Saturday.