Oldham will host Leyton Orient in another postponed fixture from an earlier stage in the season of League Two.

Most of Oldham's games have goals and most of those goals are scored by their opponents. Even so, Oldham generally score goals in mostof their home games, so we expect to see one goal from them in this match even against the surprisingly strong defense of Leyton. And when it comes to the visitors, their attack has been impressive in recent weeks and we expect at least two goals from them and why not even three.

After the unbelievable run without a win that spanned several months, Leyton suddenly changed completely and are now among the teams in the best form in the league. They won their three most recent games and conceded just a single goal. On the other side, Oldham won a single match of their last 10 and are coming into this match with six consecutive losses. We expect the visitors to take three more points after this fixture. The first match between them ended in a 4:0 win for Leyton Orient.

Oldham have eight more rounds to improve and save themselves from relegation. All they need are three points to secure their survival for this stage but it appears that this task is almost impossible for the team that is out of form. They are among the lowest-scoring teams and have the second-worst defense in the league. After 38 rounds, their goal difference is 37:61.

Leyton Orient started the new year in the worst possible way – 16 consecutive games without a win. Suddenly, however, they showed improvement and got four consecutive draws. And now, the latest improvement had them win three in a row in which they scored eight goals. They attack has been crazy effective while their defense makes almost no mistakes.

Top Betting Odds and Stats for Oldham vs Leyton Orient

FAQs regarding Oldham vs Leyton Orient 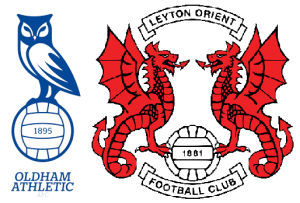 In which places are Oldham and Leyton Orient?

Leyton Orient are safe from relegation and literally have nothing to play for but after that terrible mid-season, they are motivated to end in the best way possible. The team is 17th with 46 while Oldham remain in the relegation zone at 23rd place with 31 points.