Oldham will face Northampton in this upcoming fixture from the 42nd round in League Two on Friday.

Oldham and Northampton are both in desperate need of points despite the different goals in front of them and this fixture is crucial for both sides.

Northampton are the team with the fewest goals overall this season and one of the sides with the fewest games with over 2.5 goals. On the other side, however, we have Oldham, who have the second-weakest defense in the league and some of the best stats in terms of over/under games. More importantly, we have some solid stats in h2h games – all five of the most recent games between these two teams ended with more than 2.5 goals and we expect to see another League Two classic here.

Predicting the outcome of this game is almost impossible for a couple of reasons. The odds for Northampton are not good enough while their away performances have been terrible in recent months. We prefer the both teams to score bet because Oldham have been improving a lot in attack and we expect them to score. Both teams scored at least one goal in all five of the last head-to-head games between them and the first one this season also ended in a 2:1 win for Northampton.

Northampton are one of the teams that take the fewest corners per game out of the entire league and we think that we will see another match where they have less than the league standard. For example, the visitors took just 3.20 corners per game on average in their last five away games in the league.

Oldham did not make any improvements in terms of transfers but they almost found their way back out of the relegation zone recently. For months, the team was one of the two weakest ones but now, with two recent wins, they have a better chance to save themselves than any of their direct competitors who have been in terrible shape.

Northampton were in Top 3 for the better part of the season but their recent troubles on the road have put them in a bad position and they need all the points they can get in order to remain in the playoff zone. This fixture against one of the weakest teams in the league can be considered the most important until the end of the season because they will not get a better chance for the three points than now.

Top Betting Odds and Stats for Oldham vs Northampton

FAQs regarding Oldham vs Northampton 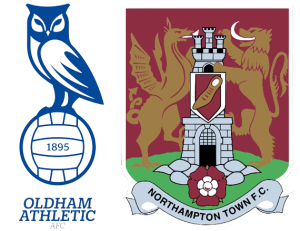 In which places are Oldham and Northampton?

As explained, Oldham have been at the bottom throughout the entire season and they remain in 22nd place with just 37 points after 41 games. On the other side, Northampton fell to 6th place and have 67 points right now.