Oldham face Salford in one of the last fixtures from this round in League Two.

Salford are in the promotion race surprisingly while Oldham are still fighting for their place in the league.

We do not expect a goal-packed match mainly due to Oldham's terrible attack. Of course, they also have one of the weakest defenses in the league and they concede a lot of goals but Salford are not a high-scoring team either. The teams played twice this season and both matches ended with less than 2.5 goals and we think that Oldham might not even score in this match.

Salford had an incredible run lately that was spoiled by a couple of defeats. The team is still a win away from the playoffs and this is the perfect opportunity for three easy points. Oldham are fighting for their survival but their form is terrible and we do not think that they will have a lot of chances in this fixture. The odds are incredible so it is all worth a shot.

We are going for an under on corners here mainly because Salford are part of this fixture. Their play style does not include those in most cases. For example, Salford took an average of just 3 corners per game in their last five outings. On the other side, Oldham took an average of 5.40 corners in their last 5 home games but Salford do not allow a lot to their opponents either.

Oldham have had an unfortunate experience this season but you can't win games when your players don't score goals and your defense is one of the three weakest ones overall. Their goal difference after 43 rounds is 42:68, which says enough about their overall season this year. They have a few more rounds to save themselves but all their competitors have an additional game on their hands.

Salford had one of the most impressive seasons this year – they were quite weak for the first half of the campaign and then turned into a completely dominating side. Now, they are right below the promotion zone and have serious ambitions to win all of their remaining games. Their program is not the easiest but with a win here and some luck, they might actually succeed.

Top Betting Odds and Stats for Oldham vs Salford

FAQs regarding Oldham vs Salford Coverage and Accessibility 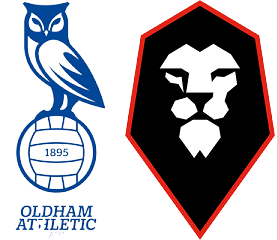 In which places are Oldham vs Salford?

These two teams have completely opposite ambitions in the remaining rounds. Salford are fighting for promotion and are currently below the playoffs at 9th place with 66 points. Oldham remain in the relegation zone and are 23rd with just 37 points.

This match has been scheduled for Oldham's home ground – Boundary Park.