Both Oostende and KV Mechelen had a bad period at the start of this campaign but have since picked it up and have been getting of points and losing on rare occasions. Friday's fixture will be an interesting battle between two teams that are typically not among the strongest but have a good chance to reach the European tournaments next year.

Oostende and KV Mechelen's old head-to-head games were never something special but this year, we saw some incredible games between the two teams and we expect something similar on Friday.

Both sides here score plenty of goals and do it both at home and away. If we take out their bad runs at the earlier stages of the season, these are two very capable teams in good form and we expect to see goals from both sides. Just to mention, their previous two H2Hs ended at 2:2 and 5:3. Both teams have seen BTTS win in over 50% of their matches this season and overall, it is expected when two teams in good form meet.

To Score in Half – Mechelen 1st Half (Yes)

There is an ongoing trend in Mechelen's matches that includes the team scoring at least once before half time. This has happened in most of the team's matches from this season in all tournaments (of course, only in those that they scored at all) and it is to be expected again given that Oostende's matches mostly end in over 2.5 goals. It is fair to mention that Oostende's goals typically fall after the break, so if you don't like betting on first halves, consider betting on Oostende to score after the break but at lower odds.

Every time we bet on matches from the Jupiter League, we take a look at the corner stats because this is a league where teams take tons of corners. Oostende and Mechelen are no different. Here are their stats from the past 5 matches: Oostende have taken an average of 5.20 corners per match while Mechelen have taken an average of 6.20 corners per match. And here are the all-season stats: Oostende – 5.83 corners on average and Mechelen – 6.25. We expect to see at least 10 without any trouble given the offensive form of both sides.

Top Betting Odds and Stats for Oostende vs Mechelen

FAQs regarding Oostende vs Mechelen 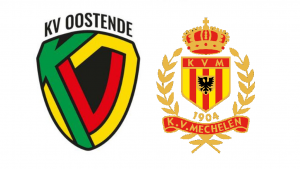 • Will Oostende have any players that will not play in this match?

Oostende have not listed any missing players although they have a shortlist of questionable players that may or may not play in the end.

• Will Mechelen have any players that will not play in this match?

Mechelen have also listed several players with light injuries that are questionable for this match and also one player that will miss the game for sure. This is defender Thibault Peyre who is recovering from an Achilles tendon injury and will be out for months.

• In which places are Oostende and KV Mechelen currently?

Although Oostende and Mechelen are quite far away from each other in terms of places, the teams are separated by just 3 points. This is due to the equal level of most teams in the Jupiler Pro League. Oostende are 11th with 17 points while Kv Mechelen are 5th with 20 points.