After starting out with hopes of Champions League qualification, Tottenham will have to go through the play-off against Pacos Ferreira to even get into the Europa Conference League stages this season. This will be a preview of the meeting at the Estádio da Capital do Móvel.

Pacos Ferreira suffered a 3-0 defeat against Boavista in the second Portuguese league match of the season. Meanwhile, Tottenham produced a strong performance to beat Manchester City 1-0 in the opening game of the Premier League 2021-22 campaign.

Tottenham are in great shape for a victory even if rumours continue to swirl about the future of Harry Kane. As shown during the weekend, Tottenham to have enough strength even if Kane does not play. Pacos Ferreira have been quite poor of late and this is especially true of their away performances. At home, however, the team has looked relatively better but Tottenham’s quality is likely to come out in front.

The weekend’s match against Manchester City produced a solid performance from Tottenham who will be looking for more of the same from this game. After having had two games in which the team has conceded four goals, Pacos Ferreira will be in a mood to regroup.

Second-half to produce the highest number of goals

The last three matches involving Pacos Ferreira has produced six goals with just one of them coming in the first half. Tottenham’s only goal of the season so far came in the second half. There will be tiredness in the second half and this could result in more mistakes.

Pacos Ferreira have been handed a difficult tie in the efforts to reach the group stages. The home result will count as a huge factor in the Portuguese club being able to cause an upset and get past Tottenham, who are one of the favourites for the trophy.

Tottenham are likely to be in the headlines primarily for Harry Kane, whose future is under a lot of doubt. The England international could once again be named as a substitute for the match. Spurs were boosted immensely by the win over Manchester City and it makes it even better that this win came without Kane. 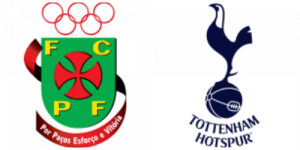 The location for this match will be at Estádio da Capital do Móvel.

Tottenham are the strong favourites to win this match according to bookmakers.