Paderborn remain near the top of the standings but that is mainly due to their exceptional performance away from home this season. Their performance at home, however, has been below average and even a weaker side like Hansa Rostock will be a challenge.

Hansa Rostock have given us plenty of surprises in recent weeks. The team won twice against Regensburg away, which was completely unexpected, then lost against the weakest away team in the league last week. What have they installed for us for this curious fixture against one of the strongest sides in the 2. Bundesliga?

Paderborn are one of the top choices in the league when it comes to “both teams to score” bets, especially in home games. The team has had this happen in 6/7 home games this season, including against weak teams like Ingolstadt. Overall, they have had BTTS in 71% of their matches. Hansa Rostock have improved since the earlier stages and scored at least one goal in 4/7 away games this season.

With Paderborn not being particularly strong at home, we expect the visitors to net at least one goal. And having their recent surprising matches literally each week, they could even go for the win, who knows?

As previously stated, the full time result for this game will not be easy to predict. We have one of the better teams against one of the average teams in the league. We base our prediction on the fact that Hansa Rostock have improved significantly and it is mostly evident in their away games. T

he team won twice against Regensburg, one of the other contenders, then won a friendly match against Wolfsburg with 1:3. Paderborn will not have an easy task against this opponent and we predict that Hansa will take at least one point from this match. Since Paderborn are the big favorite here, the double chance odds are perfect for a medium-size stake.

In our third prediction, we select an even harder option but the odds are simply exceptional here and there is no reason not to try this market. Hansa Rostock have had it all in their away games – devastating losses, massive wins, and regular draws. In 3/7 games, they scored more than 2 goals.

In a similar fashion, Paderborn have conceded at least 2 goals in 3/7 home matches. This bet is purely statistical and there is not much to hold on to but it is possible and worth a shot.

Top Betting Odds and Stats for Paderborn vs Hansa Rostock

FAQs regarding Paderborn vs Hansa Rostock 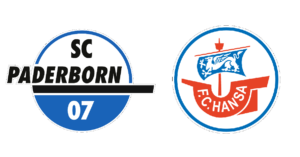 • In which places are Paderborn and Hansa Rostock?

Paderborn's away performance has kept them near the leaders of the standings. The team is currently 3rd with 25 points and needs the win here to remain in this place. Hansa Rostock shortenned the distance to the top with their two recent wins but still, they are 11th with 17 points.

This fixture has been scheduled for 12:30 UTC on Sunday, November 28.

This game will take place at Paderborn's home ground – the Benteler Arena, which has a capacity for 15,000 spectators.