Paide hosts Ararat-Armenia of Armenia in Estonia this Thursday 28th July 2022. The reverse leg was a contested match that ended without a winner. Eyes on the second leg as both sides battle to bag a win and progress to the next stage. Read further for more, including the best free predictions for the match.

The first meeting between Paid of Estonia and Ararat of Armenia ended 0-0. The two teams will now attempt to break the deadlock in the second encounter, which is also the second leg of the Europa Conference League qualifiers Round 2. Our best three predictions for the game are as follows:

Ararat will open the scoring

We expect the first goal of the second leg of Europa Conference League qualifiers, Round 2, to come from the Armenian side, FC Ararat-Armenia. The visitors have a stronger defence than Paide if we compare the recent outings. They have 4 clean sheets from the last 6 games while Paide Linnameeskond of Estonia has only once clean sheet in as many past matches.

The first leg was also a familiarity game. With no winner in the first leg, the second leg will even be more difficult. We don’t think there will be more than two goals in this second leg as well.

A draw is our third prediction for Paide vs Ararat-Armenia match. The host managed to bag a point from a barren draw in the first leg despite being the defensively weaker opponent. Paide scored in all their last 7 home games and so, we expect them to also find the net in this second leg of the Europa Conference League qualifiers.

Paide was formidable in the first leg of the competition. They have been exceptional at home, especially when it comes to scoring goals, so we think there s a good chance for a home goal in this game. They have kept four clean sheets in the last 7 home games. A strong showing is the first leg is expected in this second leg, especially with massive home support. We don’t think Paide will be culprit here and there is a good chance the hosts will walk away with at least a point to force extra time.

Ararat-Armenia won all the last three away games and kept two clean sheets during that run. The Armenian side hopes to fight for another point or more, especially after settling for a point in the first leg. This trip will be their only hope of progressing in the competition, so we expect the impressive away form that Ararat-Armenia has had in recent fixtures to continue in this trip.

The following tables feature the latest stats and the best odds for the upcoming Paide vs Ararat-Armenia encounter. 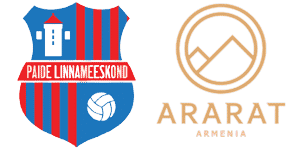 What time will Paide vs Ararat-Armenia start?

The game will take place at Paide Linnastaadion in Estonia.

How many times have Paide and Ararat-Armenia met?

There has only been one encounter previously.