The previous match for Copenhagen was a disappointment – the team received an early red card and PAOK won the match without much hesitation. If Copenhagen play at their usual level in this second fixture, we might see a completely different result.

Copenhagen scored 6 goals in their first two matches in the ECL before that disappointing 1:2 loss to PAOK. We expect this match to be packed with goals from both sides while the win could go in any direction.

We mentioned our expectations for this match – a lot of goals. While PAOK are not your typical good choice for this particular market, they are in a specific form that suggests we can go with it. Take a look at the team's recent matches below – 5/5 went over 2.5 goals and especially those at home. Copenhagen are no different away from home – loads of goals in almost all matches and in most cases – scored by them. The team has 3/3 over 2.5s in the Europa Conference League with an average of 3.7 goals per match.

It is a wonder why this market has been valued so high given the playstyle of both teams and their recent performances. It would be a complete surprise if we do not see at least one goal from both sides. Not counting Lincoln Red Imps who are the odd one out in this group, PAOK scored and conceded from both Copenhagen and Slovan Bratislava in their first fixtures while Copenhagen even gave Lincoln a goal. The first match between them and PAOK ended at 1:2 and they scored even with the red card. This should be a solid pick in one of Thursday's most interesting games.

Team Goals 1st Half – Copenhagen Over 0.5

Unless something unexpected happens like a red card again, we expect Copenhagen to score at least one goal before half time. They are among the rare teams that play better in the 1st halves of their games. The team often goes all-in early and scores even more than once. We saw two goals against Lincoln and two goals against Copenhagen. We expect to see a completely different team than the one in the previous round.

Top Betting Odds and Stats for PAOK vs Copenhagen

FAQs regarding PAOK vs Copenhagen 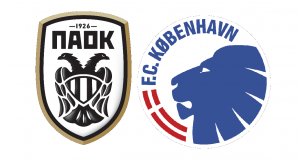 • Which players are likely to score a goal if any?

Out of both teams, there is one name that stands out as the most possible goalscorer – Jonas Wind from Copenhagen. The player is currently the top scorer of the tournament with 3 goals in 3 matches.

• Who will miss the match for PAOK?

Both teams have quite the list of missing players and those include some important names for both sides. On PAOK's side, we have Shinji Kagawa, who has been injured for several months now; defender Sverrir Ignason who was one of the key figures in PAOK's team over the past two seasons; midfielder Theocharis Tsiggaras and defender Marios Tsaousis.

• Who will miss the match for Copenhagen?

Copenhagen have an even longer list of injured players – 6 in total. Midfielder Rasmus Falk Jensen, who has been a pivotal part of the team since 2016, goalkeeper Kamil Grabara, who has been the starting keeper since he joined the team this year, midfielder Isak Johannesson, forward Luther Singh, veteran midfielder Jose Zeca, and forward Kamil Wilczek. Overall, both teams will have changes in the starting line-ups.