Partizan will be eager to continue the winning streak when they welcome Radnicki Nis in the final game of the Swiss Super League. The visitors also come into this game following a home victory.

Partizan has earned an incredible sequence of consecutive six league victories. On the other hand, Radnicki Nis also returned to their winning ways in the last game after two winless attempts. However, the trip to Black-Whites would not be an easy challenge as Partizan has won all of the last four home H2Hs. Real sa Nisave are also yet to win in the recent two away outings. Hence, we back the Steamroller to fancy their chances in front of the home fans.

Radnicki Nis lagged in all of the recent H2Hs against Partizan, scoring zero in the last five H2Hs. But the visitors have got on the score sheet in most of the recent games. In opposition, the Steamroller scored at least three goals in three of the previous five attempts and secured a total of 14 goals in the last five games. So we expect this game to end with at least three goals.

Partizan should not be in trouble in the offensive touch as they have found the back of the net at least twice in all of the last six attempts. On the contrary,  Despite the terrible stats in the recent H2Hs, Radnicki Nis seems confident because they scored in four of the previous five attempts. Adding more, the Black-Whites have also been unable to confirm a clean sheet in any of the last four home games. So we see this game ending with a BTTS outcome, changing the trend of the latest H2Hs.

The Black-Whites got the consecutive second away victory in the last game against Vozdovac with a score of 0-3. Partizan are only two points behind the top position, standing second on the points table. Danilo Pantic and Marko Jevtovic will not be available for this game due to fitness concerns.

Extending the home unbeaten streak, Real sa Nisave earned a 2-0 victory in the last game against TSC Backa Topola. Having 12 wins and 15 draws, Radnicki Nis are fourth in the standings with 51 points.  Miljan Skrbic will be absent from this game because of a knee injury.

FAQs regarding Partizan Belgrade vs Radnicki Nis Coverage and Accessibility 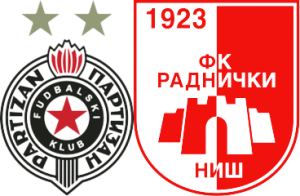 Where is the game being televised? Arena Sport.

Who won the last Head to Head fixture? Partizan Belgrade won with a 0-2 scoreline.