After losing 2-1 to Santa Clara, Partizan Belgrade will be hosting the Portuguese side, which has proven to be an intimidating task. Can Santa Clara keep its advantage, or will the Serbians get the spot in the Group Stages of the Conference League?

After reviewing all the data for the upcoming match, here is our experts' take on the game at hand:

Always check with your bookmaker before placing your final wager because the odds can change at all times. Our recommended bookmaker is William Hill.

The Serbian colossus is in a great current form, with 7 victories, 2 draws, and only a single defeat by the hand of Santa Clara, Partizan deems to be the favorited to win side. A great advantage that they have, is the fact that the game will take place at their home stadium. This has proven to be a huge thing for the Serban side as they have one of the most intimidating and loyal fan bases around the world. Furthermore, Partizan hasn’t lost a single game while playing at home in their last 10.

Both teams have shown that they can score past their opponent. The one and only head-to-head game they’ve played has finished 2-1, so we can technically say that this wager hasn’t lost yet. Partizan has had just 6 games in which only a single team found the net. In each of those matches, the Serbs kept a clean sheet.

Six of Partizan Belgrade’s last 10 games have had 3 or more goals scored in them. The number is pretty similar to that of Santa Clara, who has had half of their most recent 10 matches feature over 2.5 goals. This is why there is a high chance the fixture will result in more than 2.5 total goals.

Partizan has had a magnificent start to the season in its domestic league. The Belgrade team has scored 18 goals and conceded just 1 in its opening 5 games, giving a very strong bid for the title.

Santa Clara on the other hand has had a rather disappointing campaign so far. The Portuguese side is down 5 goals after 3 games, which could spell trouble with the defense. 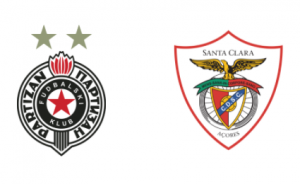