This preview looks ahead to the Australian A-League match between Perth Glory and MacArthur – teams who have been playing good football over the last few weeks.

Perth Glory jumped up two places in the A-League table after the Friday night win over Adelaide United, while Macarthur made it back-to-back league wins after beating Melbourne Victory with a strong performance. The betting tips for this match would be:

Glory are looking for five consecutive wins in the league. This would be a crucial result for the team that could push them into the top six. It is a huge motivation for Richard Garcia’s men, who trail Macarthur by just four points. After missing out on a victory against Macarthur a few weeks ago, Perth Glory will want to put things right in this match.

Macarthur have been coming up with some solid performances with players like Matt Derbyshire proving his worth with a brace in the last game against Victory. Macarthur have been unable to score in just one of the last five matches. Even though the last meeting with Perth Glory might have been a goalless draw, this game could be upside down in terms of entertainment.

Fornaroli has been able to get 11 goals for the campaign including three in his last four matches at home for Perth Glory. The 33-year-old is on course to hitting his tally from last season of 13 goals in 28 games. He has been in impressive form throughout the campaign and this recent surge in goals comes after a long drought.

The smash and grab win over Adelaide United has kept Perth Glory in the contention for the top six. The team may not have too many home matches left. This final home game of the regular season against Macarthur will hold a lot of value for this reason. The team do not have any major worries, as they have been scoring for fun. The return of just one clean sheet in the last five games would be the only small concern.

Macarthur were able to kick start their defence of the top six position once again with back-to-back wins. Still, the two wins achieved in the last five matches have been against Melbourne Victory, who have not been at their best throughout the campaign. There will be tougher tests for the team in the remaining few games of the regular season.

Looking at the Betting Odds for Perth Glory vs Macarthur 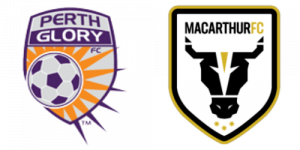 The HBF Park in Perth will be the host for this match.

Who is the favourite team to win the game?

The team marked as a favourite to win the match would be Perth Glory at odds of 6/5.