One of the two ‘late' fixtures of Saturday's Seria B program includes Perugia and Frosinone – two interesting teams that are not too far from each other in the table.

Both Perugia and Frosinone have had almost identical seasons – the only difference in their stats are the two additional losses for Perugia. Frosinone have been extraordinary in recent weeks, so this game promises to be wild.

There is something interesing about Seria B. Most games end with under 2.5 goals but we often see both teams scoring – the most common result in the league is 1:1. We expect this to be the minimal result for this game. Both teams can score goals although Frosinone's attack has been much better. This match is crucial for both teams, so we should see them motivated and ready to score goals. The previous match between them ended in a 0:0 Draw but we expect something different here. Perhaps another draw but it will not be a goalless game.

The odds are minimal here but there is no better bet for this fixture. Frosinone have been one of the three best away teams in the league – they only lost a single game in 10 fixtures. Four of those 10 ended in a draw and they won the five rest. Perugia are far from the best home team but they do have a lot of draws and most of their recent results were such. We think that Frosinone have a better chance to win the game but since draws are so common in Seria B, we believe that it is better to be sure and safe. The double chance option is a great opportunity. If you still prefer to try for the win, consider the draw no bet option, which will at least return your money in the case of a draw.

The previous match between Perugia and Frosinone did not have goals but at least there were 9 corners. We expect even more in this upcoming match. Perugia have not taken a lot of corners this season – just 3.76 per game on average and 4.30 in home games. Frosinone, on the other hand, have one of the most impressive corner stats in the league – they took an average of 6.86 corners throughout the season and 6.80 in their away games alone.

Top Betting Odds and Stats for Perugia vs Frosinone

FAQs regarding Perugia vs Frosinone 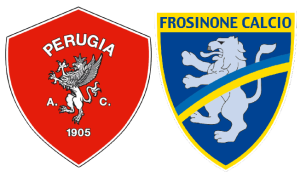 • In which places are Perugia and Frosinone?

Both sides are in the promotion race although just one of the teams is in the respective places that guarantee that chance. Perugia are 10th currently with 31 points while Frosinone are 5th with 37 points. With a win here, they could even climb to 2nd place.

This game will take place at Perugia's home ground – Stadio Renato Curi, which has a capacity for 23,625 spectators.

This game has been scheduled for 15:15 UTC on Saturday, February 12.