Perugia will face SPAL in the last match of the 30th round of Serie B and this fixture is crucial for the future of the hosts.

Perugia lost their position in the promotion zone but still have a good chance at reaching the play-offs – they simply need to take advantage of easier matches like the upcoming one against SPAL.

Apart from a low number of games, Perugia are the team that has had the fewest games with over 2.5 goals in the entire league – just 9 out of 29. They also have the lowest average goals per game at just 2.00. SPAL have had quite a lot of overs this season but we need to mention that most of the goals in their games were scored by their opponents. Moreover, four of the last five head-to-head games between Perugia and SPAL had less than 2.5 goals. It is true that the last fixture from this season was an over but we expect the opposite here. SPAL score almost no goals on the road while Perugia's defense is the absolute best in the league.

Both teams have gone through a few months of ups and downs with wins, draws and losses. We believe that SPAL should feel quite safe above the relegation zone and have nothing else to play for while Perugia are in desperate need of points. If they do not win here, they risk falling too far below the promotion zone. In each case, SPAL have had some serious issues in recent outings and lost with 4:0 three times. We think that their performance speak for themselves and Perugia are a much stronger team.

Perugia are the perfect team for corner bets based on their recent and overall performances this season. When it comes to their most recent games, both teams have been fairly active in this aspect of the game – Perugia took an average of 5.80 corners in their last five fixtures while SPAL, with their bad results, took 4.80 per game. More importantly, Perugia have been taking an average of 6.40 corners in their last five home games. We should note, however, that most of SPAL's games have few total corners – nine of the last 10 games had less than 11, so you can also consider lines like under 11/12 for smaller stakes.

Top Betting Odds and Stats for Perugia vs SPAL

FAQs regarding Perugia vs SPAL 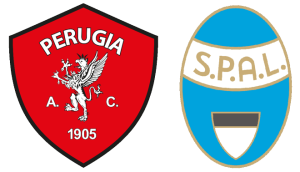 In which places are Perugia and SPAL?

Perugia remain in the promotion race but have fallen below the play-off zone. The hosts are 9th currently and have 45 points. On the other end, SPAL have been sitting right above the relegation zone for a while but there is a solid 6-point difference that should make them feel safe – they are 15th with 31 points.