Petrocub will face MOL Fehervar for the second time in a week in the 2nd leg of their Europa Conference League qualification.

Fehervar made a statement in the first leg and beat Petrocub with 5:0. There is no doubt that the visitors will continue ahead but that does not mean that we shouldn't expect a great game.

After such a first leg, we do not expect to see the same effort nor the same number of goals. In such cases, usually the second one is a massive under as one of the teams doesn't have to be at its best. In this case, we expect that Fehervar will not come out with the best they have and we will see a much slower game. They are the better team, so this second game with a reduced squad should be fairly equal and low-scoring.

There is no point for Fehervar to try and score more goals unless the manager decides that they will do their best to dominate again. We expect a different thing and it is normal in such cases to see a positive result for the weaker team in the 2nd leg. Fehervar are a massive favorite once again and we find a lot of value in the double chance bet for the home team.

Neither of these teams takes a lot of corners in their usual games and we saw it in the opening match of this round in the ECL too. At full time, there were just 6 corners for both sides. We think that most of the action in the second game will come from Petrocub's side and we do not expect MOL Fehervar to even attack that much. We think that there should not be more than 6-7 corners again.

Petrocub are one of the top teams in the Moldovian elite but still far far away from the usual level of even the Europa Conference League. The team has a strong attack and an incredible defense, for their level of domestic football. Most of their opponents to date were weaker teams, so it is no surprise that we see them this far in the qualifications.

MOL Fehervar are one of the top teams in the Hungarian NB I league and their performances in the ECL to date have been nothing short of impressive. The team has a great chance to reach the group stage at this point although their next opponent will be a team from the German Bundesliga – FC Koln. They need to keep their best players safe from injuries and we expect a different squad in this 2nd leg.

Top Betting Odds and Stats for Petrocub vs Fehervar

FAQs regarding Petrocub vs Fehervar 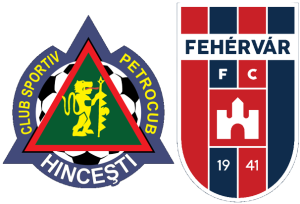 This fixture has been scheduled for Petrocub's home ground – Stadionul Zimbru.