Pisa face Cosenza in another important fixture from the 37th round in Serie B.

Pisa have a guaranteed spot in the playoffs but it is not too late to fight for direct promotion or even the championship.

Pisa are one of the teams that have had the fewest games with over 2.5 goals this season and goals overall in their games. Nevertheless, they have had a bunch of overs at home and with their current form, we expect to see at least two goals from them and an additional one from the visitors, who need the three points desperately.

Pisa won the first match between these two teams this season with 0:2 and we expect a similar result here but with more goals. It is true that Pisa have been struggling on the road lately but their home performances have never been better. They won four out of their last five games and this is the perfect opportunity to win three more points against a much weaker opponent.

Pisa have been one of the top teams in the league throughout the entire season and they still have mathematical chances for the championship. Nevetheless, with Lecce's top form, Pisa should focus on just reaching the direct promotion as no team wants to play additional games in the playoffs. Overall, Pisa could have been much higher in the table but they are the lowest-scoring team in the promotion zone.

Cosenza managed to win two of their last three games in the league but it might be too late for survival now. Even with SPAL's bad results, we think that Cosenza will remain where they are – in the play-in zone of the relegation zone. Overall, the team has been one of the worst this season, with one of the worst defenses and attacks at the same time.

Top Betting Odds and Stats for Pisa vs Cosenza

FAQs regarding Pisa vs Cosenza 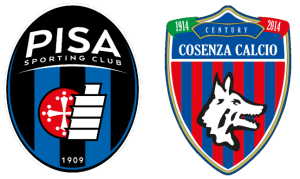 In which places are Pisa and Cosenza?

These two teams are obviously on the opposite ends of the table. With two rounds left in the season, Pisa are 4th with 63 points. On the other side, Cosenza are now 17th with 31 points.