Pogon Szczecin aims to extend their winning sequence of home games when they host Brondby in the second round of Europa Conference League Qualifiers. The Boys from Vestegnen will be unfazed as they arrive on the back of two consecutive victories.

Both Pogon Szczecin and Brondby have secured three wins in their respective last five games. However, the Dockers’ home attempts have been favourable for them where they are undefeated in the last four outings, winning three of them. On the other hand, the Boys from Vestegnen lost three times in the previous five visits and confirmed only one victory. So we predict Pogon Szczecin to take the lead in the first H2H with Brondby.

Pogon will be confident over the home advantage as they have rattled the net at least twice in all of the last four home games. The Dockers scored 12 goals in the previous five hosting attempts. In opposition, Brondby also managed an average of two goals per game in the last four duels, scoring nine in the recent five outings. Hence, a total of over 2.5 goals will be our next pick for this game.

Pride of Pomerania displayed the consistency of scoring goals at their home by scoring in all of the last eight home duels. Pogon will also be prepared to compete with the rivals’ defence who didn’t secure any clean sheet in the recent away outings. However, Brondby has succeeded to score in all of the latest home and away outings. therefore we expect this game to end with a BTTS outcome.

The Dockers enter this game after winning the opening game of Ekstraklasa against Widzew Lodz at home by 2-1. Pogon Szczecin lost the second leg of the previous round but reached this round over the home leg of 4-1 against KR Reykjavik. The club gaffer Jens Gustafsson will have zero fitness issues in the team before this duel.

The Boys from Vestegnen also started their Danish Superliga with a victory against Aarhus with a final score of 1-0. Brondby kept consecutive three clean sheets in the last three home attempts but they need discipline in the back end for away outings. Peter Bjur and three other players will be out of the game due to medical concerns.

Top Betting Odds and Stats for Pogon Szczecin vs Brondby

FAQs regarding Pogon Szczecin vs Brondby Coverage and Accessibility 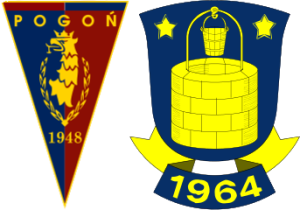 Where is the game being played? Stadion Miejski im. Floriana Krygiera (Szczecin).

Where is the game being televised? TVP Sport.