First of all, we should mention that these teams met last week, and Pogoń Szczecin won by a 4:1 scoreline; it's also fair to add that these teams are on opposite sides when it comes to form. On one hand, we have a Pogoń Szczecin side that's coming off back-to-back wins; they are unbeaten in their last six matches in all competitions, with three wins and three draws. On the other hand, we have a KR Reykjavik side that won just one of their last six games; they suffered three losses in their last four games, including their last two games. Considering both teams' recent form, coupled with the result of the reverse fixture, we are predicting a win for the visitors.

The first leg of this encounter was a five-goal thriller, with both teams finding the net; we believe that this will also be a high-scoring game. This is because both teams' recent games have mostly been on the high-scoring side. It's important to note that six of KR's last eight, and eight of Pogoń Szczecin's last 11 games went above the 2.5 goal mark; all things considered, we should expect a few goals in this match.

Top Betting Odds and Stats for KR vs Pogon Szczecin 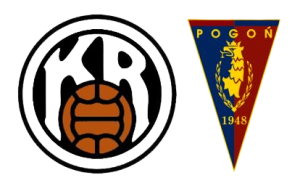 Where is the game being played? KR-Vollur

Who won the last head to head fixture? Pogon Szczecin