Nagoya Grampus are pit against Pohang Steelers for a place in the AFC Champions League semi-finals. The Grampus will make the trip to the Pohang Steel Yard before entertaining the Steelers at the Toyota Stadium.

The last time Nagoya Grampus made the trip to the Pohang Steel Yard, it finished all square at 1-1. We are backing the Japanese to put their Korean rivals in a corner in the first leg given the Steelers poor form of late. They have lost three of their last four fixtures and look unlikely to deal with the Grampus threat.

Pohang Steelers have been involved in several high scoring affairs recently, usually at their own expense. Three of their last four fixtures concluded with an Over 2.5 goals scoreline, a period in which they conceded nine goals. On the other hand, goals do not flow when Nagoya Grampus are concerned. Their last three J League outings had Under 2.5 total goals and they will look to force the issue based on their superior defence.

In their most recent double-legged knockout competition involvement, Nagoya Grampus conceded thrice. Prior to that, they had not conceded in two J League outings. This would inspire confidence in the struggling Pohang Steelers, who have conceded in four of their last five fixtures. With the away goal having its importance, Grampus would be more cautious than their July meeting that finished 1-1. Consequently, we are predicting a clean sheet in their favour and both teams not scoring in this early October 17 fixture.

The start of October brought good news as Pohang Steelers ended their three-match losing streak with a 2-3 away win over Gwangju FC. With the squad well-rested in the international break, the Steelers will look to seek a positive result against Nagoya Grampus in the AFC Champions League. They will have to get out of their scoring rut in this fixture as the Grampus' defence has impressed against all and sundry in the current campaign.

Massimo Ficcadenti would be pleased with his side's performance in cup competitions, along with their continued brilliance in the J League. They overcame the challenge of FC Tokyo in the YBC Levian Cup over two legs and will want a similar outcome to their adventures in the AFC Champions League. The semi-finals are in touching distance for the Grampus as they had already beaten their South Korean rivals during the group stage.

FAQs regarding Pohang Steelers vs Nagoya Grampus Coverage and Accessibility 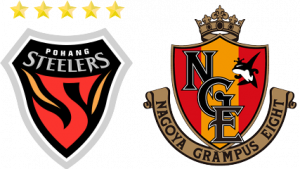 Where is the game being televised?