Pohang Steelers aims to get back on their winning track when they host Suwon FC in their coming fixture. Suwon Dashers also dropped three points in their previous game.

Pohang Steelers come into this game after consecutive three winless games but have lost only once in the last five attempts, winning two of them. Suwon FC have also quite the same results in the overall meetings but the away challenges have been a tough challenge for them where they lost five of the last seven outings. In the H2Hs, Pohang Steelers registered their lead in all of the recent three duels. So we back the Steelers to record the lead once again at the end of this game.

The last two H2H meetings of these teams followed a high-scoring pattern and teams contributed 11 goals in that span. The hosts have found the back of the net seven times in the last four home games. while on the other hand, Suwon Dashers managed to get a total of ten goals in the recent five outings. Given that, we can expect at least three goals from the teams in this game.

Three of the last five H2Hs of Pohang and Suwon displayed a pattern of BTTS outcome and we are waiting for the same in this game as well. The hosts are scoring from the last four home games while Suwon also scored in four of the previous five attempts. However, the visitors’ away stats, where they scored only three goals in the five outings, can help the hosts to restrict the rivals to a low score.

Pohang Steelers made only one point in the last three league outings, drawing the last game against Seoul FC. However, the team is still in the top four due to having three wins and two draws in the current season. The club manager Gi-dong Kim will report only one player on the injury list ahead of this game.

Suwon Dashers played one of the exciting games of the season previously where they lost the 3-4 game by leaking the goal in the 87th minute of the game. The club didn’t make a fine start to the season and lost four of the seven attempts so far, standing at ninth place. The team manager Do-Kyun Kim will have to contend with two fitness concerns before this game.

Top Betting Odds and Stats for Pohang Steelers vs Suwon

FAQs regarding Pohang Steelers vs Suwon Coverage and Accessibility 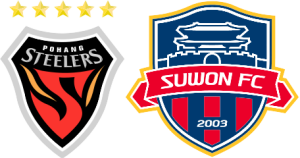 Where is the game being played? Pohang Steel Yard (Pohang).

Who won the last Head to Head fixture? Pohang Steelers won with a 3-1 scoreline.