Pordenone face SPAL in the last fixture of this round in Seria B on Sunday. Two teams with the same purpose this season – to survive and play in the same league next year.

Pordenone have had a rough season. The team won its second match in the previous round and it has been 20 games already. You get the picture. Spal have been slightly better but also remain dangerously close to the relegation zone.

Given the stats of both teams, this bet might seem difficult and it is a fact but we have two of the weakest teams, and that often means a lot of goals. Not to mention the three head-to-head games between them over the past two seasons – 3:3, 1:3, 5:0. We expect something similar in this match as this is the perfect opportunity for both teams to score a rare win.

Spal are the better team, there is no doubt, but it should be noted that the visitors have been performing surprisingly well on the road and this is why we expect them to win even more. Surprisingly, Spal lost only one of their 6 recent away games and actually won three of those. Pordenone, in turn, have won just a single game out of the 10 at home they played, which ranks them as the second-worst home team in the league. We expect a positive result for Spal but since this is the ‘league of draws', we cannot be too sure about the clean FT result. With the draw no bet option, we are sure that we will get our money back if we have a tie.

Neither of these teams has taken an impressive number of corners overall this season but we often see loads of those in games between two weaker teams. For instance, all three of the previous head-to-head games had at least 10 corners. We expect something similar here. In each case, here are the stats. Pordenone have taken an average of 4.50 corners per match this season while Spal have taken a bit more – 5.45 per match.

Top Betting Odds and Stats for Pordenone vs SPAL

FAQs regarding Pordenone vs SPAL 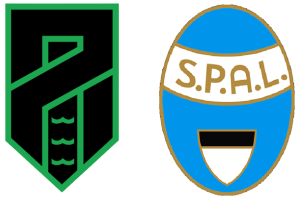 • In which places are Pordenone and Spal?

Both teams reside in the bottom half of the table but there is a significant difference between them. Pordenone are last in the league with just 11 points after 20 games. Spal, in turn, are 15th with 22 points and reside just above the relegation zone. This fixture is crucial for them too.

This game will be played at Pordenone's latest home venue – Stadio G. Teghil, which has a capacity for 5,000 spectators.

This game has been scheduled for 15:15 UTC on Sunday, February 6.