We have an incredible game upon us – Port Vale take on Bristol Rovers in a crucial match from the 43rd round in League Two.

Port Vale and Bristol Rovers have been among the best teams in the league and this fixture is crucial for both teams' chances for direct promotion.

Both teams have incredible attacks and solid defenses and there is always a chance that we will see a goal-packed game. However, there is something important about Bristol Rovers – most of their games with goals are at home while on the road, they have had under 2.5 in four out of five recent games. We think that this will be a difficult game for both teams and each side will be careful not to concede goals.

Port Vale and Bristol Rovers have unbelievable corner stats and this shows the attacking football of both teams. For example, Port Vale took an average of 6.00 corners per game in their last 5 home games. On the other side, however, Bristol Rovers took an average of 8.40 corners in their last five outings, which is almost enough to cover our line of choice here. Of course, this will be a difficult match but we still expect 5-6+ from the visitors.

Port Vale have been among the top teams since the start of the league and while they had some problems a couple of months ago, their current form is absolutely unbelievable. Their defense this season has been extraordinary and conceded just 39 goals in 42 games while most teams in the league allowed 50+ already. Their attack is also the third-strongest in the league to date and this is particularly in the home games.

Bristol Rovers had a rough start to the season and then suddenly became one of the top teams in the league with an incredible series of wins. The season is almost over and Bristol Rovers need about one more win to feel completely comfortable in the playoff zone. This match against Port Vale will be a difficult challenge but they have shown us that they can beat any team. 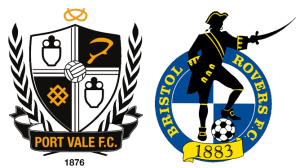 In which places are Port Vale and Bristol Rovers?