Port Vale are out in search of the first league win of the season when they welcome Carlisle United to the Vale Park this weekend.

Port Vale could only manage a goalless draw against Tranmere Rovers to add to the loss against Northampton in the opening game. Carlisle United picked up the first win of the season by beating Swindon Town 2-1 in an away game.

Carlisle to win the game

Carlisle United come into this match with the recent improvement in form after the win over Swindon. They have a great head-to-head record over Port Vale after winning four out of the last six encounters. Despite the strong and deep squad, Port Vale have had a poor start to the season with the team failing to win a game or score a goal in the opening two rounds. Carlisle might just be able to pull off another win over Port Vale.

The two teams have been shy in the opening rounds of the season. In the win over Swindon, Carlisle managed to get two goals and these were the first for the team this season. Meanwhile, Port Vale are yet to score in the league after playing against Northampton and Tranmere Rovers.

Carlisle and Port Vale have struggled to hit top form in this early part of the campaign and this is quite an expected outcome given the poor form during pre-season. After a goalless draw between these two teams back in April and a narrow win for Carlisle back in October, this game could once again produce a low scoring encounter with one of the teams failing to score.

Port Vale might have begun the season as a favourite to finish in the top half of the table. The failure to win the opening two rounds of the competition increases pressure on coach Darrell Clarke. On the positive side, there are no injury problems for Port Vale.

Carlisle were a relieved team to pick up the victory over Swindon. This was the first win of the season for Carlisle, who enjoyed a good 2020-21 campaign. However, a tough schedule and many injuries were the key problems for the club last season. Now, they have been unable to create too many chances so far.

Top Betting Odds and Stats for Port Vale vs Carlisle 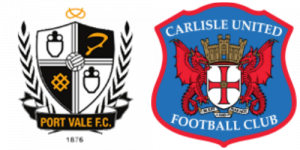 People's Pension Stadium will be the destination for this game.

Carlisle are rated as the favourites to win this match.