Port Vale vs Exeter is another postponed match that will be played this week and it is of huge importance for both teams.

Port Vale are in brilliant form and will try to get back in the promotion zone after losing their position a month ago. Exeter, in turn, are now looking towards the top of the league as Forest Green's form continues to be terrible.

Port Vale and Exeter might be among the highest-scoring teams in the league but these two teams have a lot of recent history between them and the results suggest that we might see under 2.5 goals. For example, nine of the last 10 head-to-head games between them ended with less than 2.5 goals. Both teams have brilliant attacks and even better defenses, so it is normal to expect few goals in such an important fixture.

Port Vale are the favorites here despite Exeters incredible form and it is normal – they are one of the strongest home teams in the league and have been playing brilliantly against this opponent in the past couple of years. Port Vale won the three previous fixtures against Exeter and conceded only a single goal. These is a good chance that we will see a draw here, which is why we bet on the DNB market instead of the FT result.

Port Vale had some issues in the recent past but have now won their three most recent games in the league. Their performances were incredible and they dominated against all recent opponents. The team has scored 55 goals in 36 games, which is one of the best stats in the league.

Exeter have been incredible since the start of the new year and now even reached below Forest Green in the table. They are just 5 points below the top and will be motivated for another win that could bring them even closer. Their attack has also been incredible this season and scored 54 goals in 36 games.

Top Betting Odds and Stats for Port Vale vs Exeter

FAQs regarding Port Vale vs Exeter 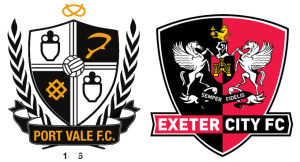 In which places are Port Vale and Exeter?

These two teams have had similar results throughout the season and despite the diffence in places, they are just 5 points apart from each other. Port Vale are currently 8th with 59 points while Exeter are 2nd with 64 points.

This match will be played at 19:45 UTC on Tuesday.